There are plenty of elite college sports athletes that excel at nearly every sport they try out for. A good recent example is Isaiah Simmons, the up-and-coming NFL star that was a prolific long jumper and may well have gone on to represent his country as a professional track and field athlete.

Over the years, so many sports stars have had to make that crucial decision, choosing between two sports to concentrate upon just one, and many of those decisions came down to the potential earnings involved. Michael Jordan actually tried giving baseball a go when he took a break from basketball, while Russell Wilson, who is an exceptional NFL talent, was playing baseball at a college level.

For many of us, winning money on betting on the American football odds or backing the next NBA champions is the closest we’ll get to making any money through sport. However, for any future sports stars who face a difficult decision between two sports, it could help to know how much the average annual salary that players are getting for each of the top global sports. 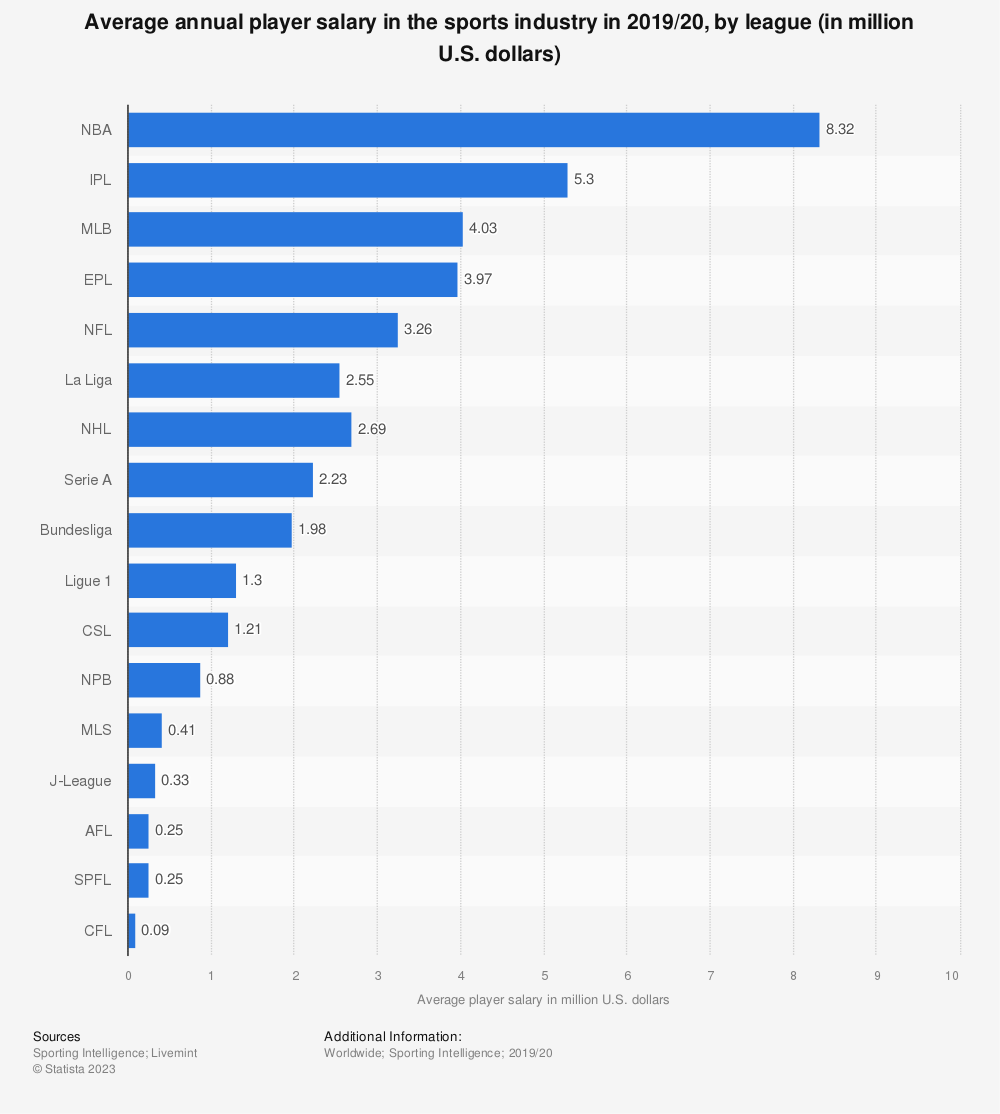 From the above graphic from Statista, the NBA is a clear leader in the money stakes, with the average player earning a staggering $7.7 m each year. However, it is worth factoring into the equation of what the highest-paid athlete is earning in each sport, as those at the very top of their game could be earning a great deal more than the average.

The sensational Barcelona and Argentina soccer star tops the highest-paid sports star list published by Forbes and has done for some time now. Many regard him as the best-ever player and his salary reflects this, along with the sponsorship deals and other bonuses that he can command with his extraordinary talent.

The debate of the last decade and more in the soccer circles has been around who is the best player out of Ronaldo and Messi. Lionel Messi recently picked up his sixth Ballon d’Or, (the award for best soccer player) to overtake Ronaldo’s five, but Cristiano will no doubt be cheered up by his huge salary.

Brazilian soccer player Neymar earned the third-highest salary in 2019, playing for PSG in France. Neymar moved to PSG from Barcelona, where he was reportedly tired of being second fiddle to Messi, earning himself a nice payrise in the process. However, sources insist that Neymar regrets leaving the Camp Nou and has been trying to angle a move back, but his huge salary could be a stumbling block.

The highest non-soccer player in the top earners is boxer Canelo Alvarez. His impressive record of 53 wins in 56 fights shows his pedigree, and 36 of those were knockouts. He comes from a boxing family and his six brothers all became professional boxers, albeit not as well-known as Canelo, who has won world titles in two different weight classes.

Just slightly behind Alvarez is tennis legend Federer, who has been dominating men’s tennis since he took his first Grand Slam in 2003. Since then he has won 20 Grand Slam singles titles, even getting to 10 consecutive Grand Slam finals between 2005 and 2007.

In 2019, Wilson broke the records to become the highest-paid NFL player ever. Wilson has been playing for Seattle Seahawks since 2012, and the quarterback extended his contract to boost his income significantly last year and also earns a huge pay boost from his lucrative Nike contract.

Rodgers was not too far behind his NFL rival Wilson in terms of pay last year. The Green Bay Packers quarterback has been a top performer in NFL for the best part of 15 years and is in the twilight of his career at 36, but that has not harmed his earnings.

The King of basketball is still earning a pretty tidy sum based on the information provided by Forbes. He surprised many people when he made the decision to join the LA Lakers but the four-time NBA MVP cited his family as the key reason to move to California. He is earning plenty from money-spinning sponsorship deals and even owns a share in English soccer team Liverpool, who are flying high right now and have seen a huge increase in net worth over recent years.

Stephen Curry has been in sensational form for the Golden State Warriors for over a decade and arguably has taken LeBron’s crown as the King has got older and not quite at his peak anymore. Named MVP in 2015 and 2016, the point guard is still delivering and is currently in third place for the all-time 3-pointers with an astonishing 2,285.

Another NBA player, Durant makes it into the top ten, joining his former GSW teammate Curry. Now at Brooklyn Nets, the 2014 MVP and two-time NBA Champion has been lighting up the basketball courts since 2007 when he started out with Seattle SuperSonics.

If you are in that fortunate position to get to choose which sport to continue with, this information might just help you to make that critical choice, if not it probably just makes you a little envious!

Dropping The Ball – How “Normalizing” Sports Will Make It Worse

July 3, 2020 Ryan Morgan National Comments Off on Dropping The Ball – How “Normalizing” Sports Will Make It Worse

It’s understandable that sports want to normalize their games as much as possible in severely abnormal times. So they pump in crowd noise, allow fans to place personalized cutouts in seats, and they go on […]

Should We Be Treating Sports Like One Big Science Experiment?

June 26, 2020 Paul Redman National Comments Off on Should We Be Treating Sports Like One Big Science Experiment?

Right now at colleges and universities across the country, a giant science experiment is being conducted. What they are attempting to prove is that it is safe for student-athletes to return to school, practice and […]

May 30, 2019 Charley Sconlan Other Comments Off on How Children Benefit Mentally From Playing Sports