Keep up to date with all of the commitments, signings, and flips that happen on one of the most exciting days in college football, National Signing Day. Follow along with Oregon Sports News as we cover all things National Signing Day and the Oregon Ducks. Follow @OregonSportNews and @PortlandGarrett on Twitter as the next crop of college football talent declare where they will play for the next four years. 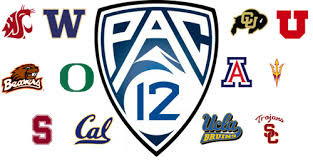 Below are the team class rankings as of 3pm on Wednesday. Obviously these rankings are subjective and leave a little room for error, but these give a decent gauge on where the teams sit after a flurry of activity on National Signing Day.

USC really dominated recruiting in this go-round. They landed all kinds of talent, especially on National Signing Day when it seemed like they snagged everyone that they wanted, including Oregon’s coveted tight end Josh Falo.

Oregon ended up with a top-20 class in the nation. That was a surprise after the coaching change and a 4-8 season. This class lends itself to a rebuild in the next couple years.

Arizona had a fall off late in the game, and a lot of that is because of Oregon. Oregon stole 4 commits from Arizona. That is hard to come back from.

Oregon State had a good class that included a lot of talent on both sides of the ball. Look for Oregon State to use some of these Freshman next season, especially Isaiah Hodgins and David Morris. 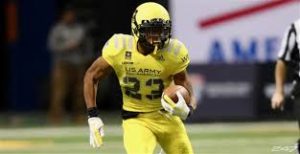 Rivals has Lenoir ranked as the #1 Athlete in the 2017 Class. The Army All-American made a name for himself during the All-American game a month ago. Since then, his stock has steadily risen. Lenoir was once committed to Oregon but decommitted when the coaching change happened. Lenoir is the highest rated recruit of the class and will be an instant game-changer. Lenoir has a chance to play on both sides of the ball.

Slade-Matautia may just be the most talented commit yet for the Ducks. He is an ultra athletic linebacker that will have the range to cover running backs and tight ends, but has a nose for the ball. Check out his highlights.

I wrote about it back a few weeks ago, but tight end was a huge need for this recruiting class. Josh Falo was supposed to fill that need. Instead, the number 2 tight end in the nation will play for USC. That is a tough blow for Oregon. The Ducks graduated 3 tight ends last year and have no tight ends coming in this year.

The defensive revolution at Oregon continues with Niu. He will be an athletic addition to a linebacking corp that needs depth and talent. Hopefully soon, fellow linebacker Isaac Slade-Matautia will sign and join that group of linebackers.

Even though Justin Herbert finished his true freshman season on a strong note, the quarterback position was an important one going into this recruiting cycle. The Ducks had relied on graduate transfers for the past two seasons and needed to build a pipeline of home-grown quarterback depth. Burmeister was the perfect recruit to bring in. With the coaching change, there will be competition for every position on the field. Burmeister will be in before spring ball and should compete for a job early in his career.

Thought by many to be a defensive lineman, Popo Aumavae has been solidly committed to the Oregon program for a while. The 3-star talent sent his Letter of Intent in and Oregon announced him as an Offensive Lineman. That will be an interesting story line to watch. 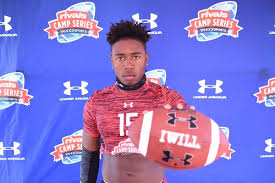 4-Star Athlete Jaylon Redd took an official visit to Ole Miss last weekend and there were rumors surrounding him that he may flip his commitment. After sending in his Letter of Intent, those worries can be put aside. Redd is a difference maker that will most likely play as a slot receiver. Another utility-type athlete that can be used in a variety of ways!

3-Star Defensive Tackle Austin Faoliu sent his Letter of Intent to the coaching staff. Faoliu committed while playing in the Polynesian Bowl and will be a big addition to the depth on the defensive line. Faoliu seems like a great fit at the 5-technique in the 3-4 defense. 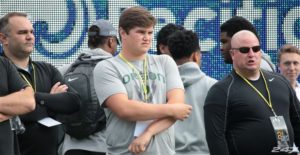 After missing out on Mekhi Becton earlier in the day, the Oregon Ducks offered a scholarship to 3-Star Offensive Lineman Cody Shear out of Sheldon High School in Eugene. Shear was a high school teammate of quarterback Justin Herbert. Shear had been committed to Arizona, and is now the 4th commit to flip from Arizona to Oregon. 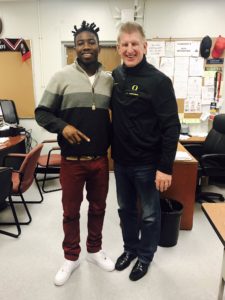 Uncommitted until the morning of National Signing Day, Billy Gibson sent his Letter of Intent to the University of Oregon coaching staff with no fanfare or announcement. This is an important development for the Ducks who need defensive depth and the safety position was a position they didn’t have a commit for.  Gibson becomes the 7th Oregon commit from the state of Florida. Billy Gibson’s highlights. 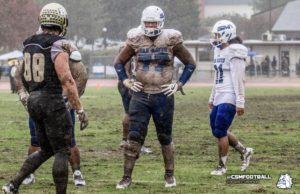 The Number One Junior College Offensive Tackle has committed to the Oregon Ducks. George Moore played for the College of San Mateo and has been a coveted recruit for months. Once seen as an Oregon State lean, Moore has everything that it takes to be an instant impact player for this Oregon offensive line. Moore is 6’7″, 307 lbs. This is a guy to watch this fall! 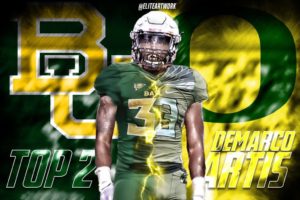 Three-Star Defensive End/Outside Linebacker DeMarco Artis commits to Baylor, over the Oregon Ducks. A lot had Artis pegged as a sure thing for this Oregon recruiting class. Oregon has built quite the pipeline from the state of Florida and Artis was thought to favor Oregon over the controversy-ridden Baylor. Artis chose to play for the Bears and the Ducks will look elsewhere.

About Garrett Thornton 64 Articles
Garrett has been a Senior Writer for Oregon Sports News for 4 years. In that time Garrett has primarily covered the Portland Trail Blazers. He has also started his series "Breaking Vegas with Garrett Thornton", picking NFL games against the spread. Along with his coverage of the Blazers and NFL, Garrett covers Oregon Ducks football.
Twitter

The Oregon Ducks Will Have Questions To Answer In 2021

Well, we can’t really say we didn’t see it coming. The Ducks got their butts handed to them in the New Year Six bowl game against the Iowa State Cyclones and it wasn’t all that […]

This weekend, Pac-12 football returns to the state as the Oregon State Beavers host the Oklahoma State Cowboys on Friday night, and the #11 Oregon Ducks hit the road to face the #16 Auburn Tigers […]