One thing that keeps college football so exciting is the constant turnover of players. On one hand, there is a constant competition for spots and an urgency created by the fact that these players are only on campus for 3-5 years. On the other hand, this constant turnover of personnel can create difficulties for a team and leave them in tough situations.

That is where the current Oregon Ducks football team is right now. Seniors Evan Baylis, Pharaoh Brown, and Johnny Mundt are all graduating. Current tight ends on this years roster include three redshirt sophomores, one redshirt junior, and a redshirt freshman. Three of the tight ends on the roster walked on, one of those walk ons was a defensive player up until a few weeks ago. Those 5 players have played a combined 14 games for the Ducks, totaling 6 receptions (11 of those games and all 6 receptions were last season by redshirt sophomore Jacob Breeland).

In other words, the Ducks have a major tight end problem!

This is why Josh Falo should be priority #1 for Willie Taggart and the Oregon Ducks.

Falo is a 6-foot 5-inch tight end from Inderkum High School in Sacramento, California. He is a four-star athlete that is the 2nd ranked tight end and 80th ranked player in the 2017 class by 247 Sports.

When you look at the commitments to the Oregon program so far this year, the majority of them are on the defensive side of the ball, but there may be no more glaring hole on the roster than the tight end position. Falo has the chance to be the #1 tight end for the Ducks as soon as fall camp.

Falo is a long, fluid athlete that could be used all over the offensive formation to create mismatches. There aren’t many linebackers that will be able to keep up with him in the open field, and there aren’t many defensive backs that possess his size or length. He has a huge catching radius that would make any quarterback happy to throw to him. He has the instincts to jump and high-point a football unlike a lot of high school athletes.

The two areas that will improve with college coaching are his run blocking and his route running. Those are crucial if he wants to be an every-down starting tight end.

Even though Falo is 18 years old and has never played a down of college football in his life, it is hard to imagine Falo not being the starting tight end in Eugene if he were to commit to the Ducks.

Although it is somewhat unclear exactly what the offense will look like under Taggart, the tight end position has been crucial for the Ducks in the past. Falo would join a long line of athletic, and talented tight ends for Oregon.  Guys like Ed Dickson, Russ Francis, Dante Rosario, Justin Peelle.

Falo played in the Under Armour All-American Bowl and is playing in the Polynesian Bowl this weekend. He recently had his official visit to USC. Shortly after the visit to USC, Falo hosted a couple Oregon coaches for an in-home visit. Offensive Coordinator Mario Cristobal, Wide Receiver Coach Jimmie Dougherty and Defensive Line Coach Joe Salave’a were there reruiting for Oregon.

The University of Oregon will host Falo in Eugene for his official visit on January 29th, just two days before signing day. Falo has said on his Twitter account that he will be committing on January 30th. 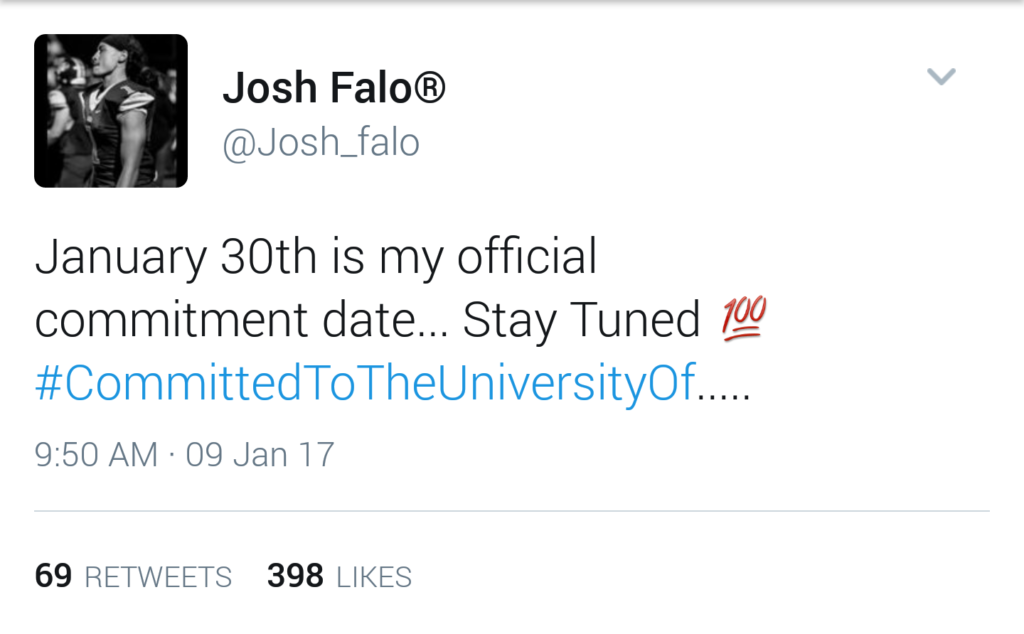 It is thought to be a two-team race between USC and Oregon, with the University of Colorado as the dark horse.

2.     The Ducks get the final official visit before he commits.

Check out Falo’s highlights below and let me know how you think he would look in Green and Yellow!

About Garrett Thornton 64 Articles
Garrett has been a Senior Writer for Oregon Sports News for 4 years. In that time Garrett has primarily covered the Portland Trail Blazers. He has also started his series "Breaking Vegas with Garrett Thornton", picking NFL games against the spread. Along with his coverage of the Blazers and NFL, Garrett covers Oregon Ducks football.
Twitter

Ohio State, Clemson, and LSU, each with an 11-0 record continue to expand the distance from them to the rest of the pack in our system’s Top 25 rankings for Week 14.  In fact, the […]

Who Got Next? Oregon Ducks Women’s Basketball Rolling In Historic Fashion

April 1, 2019 Miriam B. Dye Oregon Ducks Comments Off on Who Got Next? Oregon Ducks Women’s Basketball Rolling In Historic Fashion

We all know there are plenty of reasons to call it “March Madness” right? But just in case you don’t know what the whole fuss is about, we’ll let tell you what you just missed […]

March 5, 2021 Paul Redman Oregon Ducks Comments Off on Why Oregon Basketball Is Consistently Excellent … And The Rest Of The Conference Is Not

Is this the golden age of the Oregon Ducks? Are they in charge of the PAC-12 conference, at least when it comes to the so-called revenue sports of college football and men’s basketball? Can we […]