The weekend is fast approaching and your holiday hangover is nearly cleared up. What’s left to do? Get ready for a weekend full of live mixed martial arts and aggressive submission grappling, that’s what! Rumble at the Roseland 95 and Submission Underground 6 (SUG) will be taking place at the Roseland Theater this Saturday and Sunday. With SUG coming back to the Roseland that means not only will fans have some of the best amateur fighters on the west coast they can watch, but some of the best MMA fighters in the world as well.

For a mixed martial arts fan attending this weekend’s shows, it is truly a unique and inviting experience. These back-to-back events allow you up close access to the fighters of the future and a chance to meet and talk to current UFC stars and even former UFC champions. Between the two events there are 42 matchups (that is not a typo there really are 42 total matchups) for the fans to get excited about so let’s take a closer look at a few that could be especially interesting.

Rumble a the Roseland 95

Saturday night’s main event for the 125-pound title is certainly the fight most people are talking about. Keaneo “Young Gunz” Moyer is the most vocal champion in recent memory in the Full Contact Fighting Federation (FCFF) and he has been just as loud inside the cage as out. While “Young Gunz” has been dominant in the FCFF cage, he hasn’t done it without controversy. His contentious relationship with former FCFF champion Cris “Sunshine” Williams has certainly helped Moyer look the part of the bad guy in some circles. Love him or hate him, he is a captivating champion with finishing power, rare speed, and great confidence. On Saturday, Moyer will be facing his toughest test to date as he steps into the cage against Sean Kalinoski. Kalinoski has nearly three times the experience in the cage as Moyer and has more than twice as many wins. Beyond that, Kalinoski is a natural bantamweight with the height and length to give most flyweights trouble. He has a big advantage on the ground and will be where he looks to take the fight. This should be a great headlining bout.

This matchup is likely the last amateur fight for local fighter and standout prospect, DJ Nuttall. Nuttall has become one of the top amateur prospects on the west coast and with this lightweight title fight being his last as an amateur, it is one that fans of the Oregon fight scene won’t want to miss. Nuttall is the heavy favorite here; his top game is strong and his submissions have proven to be the real deal. His opponent, Chance Marsteiner, had suffered two losses in a row prior to a big head kick-TKO victory at Rumble at the Roseland 94. With the highlight reel finish fresh in his mind, expect him to come into the fight looking to build on that moment and a victory over the highly touted Nuttall would be a huge feather in his cap.

Former UFC heavyweight Champion Tim Sylvia will be making his SUG debut on Sunday against Gracie Barra Portland head coach and one time SUG winner, Fabiano Scherner. Sylvia is a very interesting personality in the world of mixed martial arts. The once loved UFC Champion had a precipitous fall from grace and eventually found himself on the outside looking in. Even with a series of wins out the UFC, Sylvia was never able to find his way back to the top of the sport. While his fighting career has ended, he has become one of the brutally honest personalities in the world of MMA and his desire complete has clearly never waned. Many remember him as an aggressive striker but his love for the ground game has always been clear to those who were true fans of the former champ. Famously, he out-grappled submission expert Jeff Monson at UFC 65; he was looking for a submission the whole time. As far as submission expertise is concerned, Sylvia will be at a severe disadvantage against Scherner, but it will be incredibly exciting to see him inside the cage walls for the first time in years.

Vagner Rocha is on a hell of a run in 2017. Rocha has two 2nd place finishes at the Eddie Bravo Invitational and became the first Combat Jiu Jitsu Champion earlier this month. Rocha has taken on some of the top grapplers in the country and has proven he is one of the best in the world. Fans will not want to miss the chance at seeing him live; he is aggressive, strong, and relentless on the mat. He will be going up against recent Ultimate Fighter winner, Jesse Taylor. Taylor has been a true comeback story on his run through The Ultimate Fighter: Redemption season. He took the longest road possible to make it to the UFC having once been removed from The Ultimate Fighter Finale and floundering out of the promotion after just one fight. However, with his life seemingly on track and winning TUF earlier this year, Taylor was flagged by USADA for a potential anti-doping violation. It would seem that this competition would serve as a way to keep competing while he continues to work with USADA and the UFC in making his first official return to the Octagon. All that aside, Taylor is a ferocious wrestler and his nearly 50-fight MMA career will give him a good bit of experience to fall back on when the cage door closes behind he and Rocha. With these two highly aggressive grapplers in the SUG cage, this match is sure to be one of the most physical of the night.

For the rest of the cards please see below. For tickets to both events visit, roselandpdx.com. 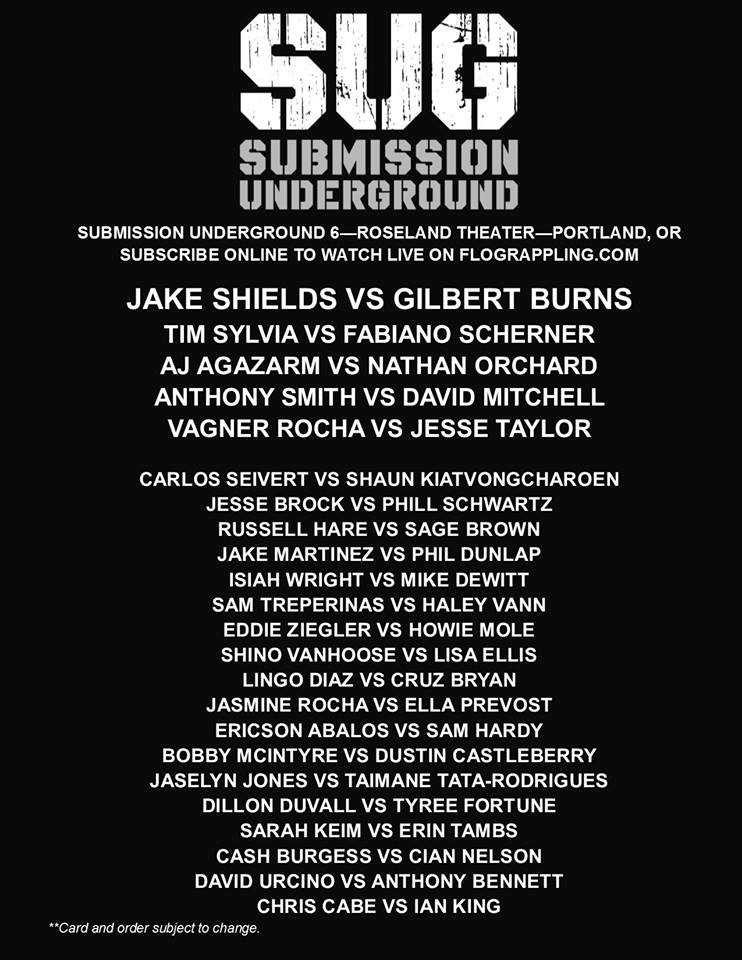 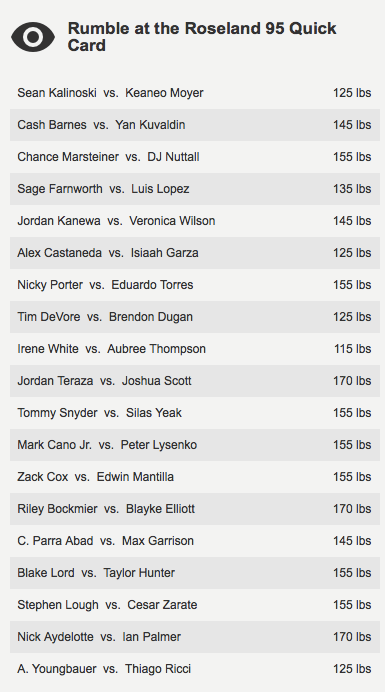 The Writer And The Fighter – Breaking Down All Things UFC 249

April 8, 2020 David Golden Combat Sports, Podcasts Comments Off on The Writer And The Fighter – Breaking Down All Things UFC 249

On this episode of The Writer and The Fighter, Oregon Sports News Senior MMA Writer David Golden and Bellator MMA fighter Jake Smith break down all things UFC 249. From the stacked card to the […]

The Hulk Vs. Hercules – Johnny James Battles Ray Hill At Rumble At The Roseland 96

January 17, 2018 Portland MMA Combat Sports Comments Off on The Hulk Vs. Hercules – Johnny James Battles Ray Hill At Rumble At The Roseland 96

Fight week is finally among us!! The FCFF is once again starting off the new year with another great card. 2018 will mark a big year for the FCFF as it will mark its 100th […]