Welcome to the world we live in! We, in fact, are living in verifiable, Brad-Pitt-in-12-Monkeys-like crazy times, where the impossible is not only possible, but the new normal. Shall we rewind the madness of the past 12 months as proof?

The Chicago Cubs won the World Series after trailing three-games-to-one.

The Warriors lost the NBA Finals after leading three-games-to-one.

Gonzaga made it to the Final Four!

LeBron James, who is having one of his better seasons and is still the best player in the NBA, may finish as low as fourth in the MVP race this season.

The New England Patriots came back from a 28-3 deficit to win the Super Bowl.

Donald Trump won the presidency of the United States.

With every underdog victory and crazy comeback we have witnessed, one wonders if there is room for one more mind-boggling upset, one last chance to witness the impossible.

Logic and reason have been a little tipsy of late, leaving the door wide open to the unsettling winds of unpredictable chaos. Behemoths are no longer invincible.  Having a 90% chance to win a game is bad mojo, and once unbeatable teams are no more. The Blazers must hop aboard this crazy train that the universe is currently navigating and slay the Warriors to make the inconceivable happen once again.

Yes, thinking the Blazers have a chance to win a playoff series against the Warriors is a bit hard to swallow. Perhaps, you would like a glass of sensibility to go with your main course of absurdity? How about this statistic from last year’s playoffs when the Blazers squared off against Golden State?

Though the record won’t show, one could argue that this Blazers squad is better than last year’s team that gave the Warriors a hard-earned gentlemen’s sweep.

Of course, there are many factors that will determine the course of this series, like the status of one Bosnian beast with a penchant for purple suits. Also, Damian Lillard will have to be the best player on the court during the series. Allen Crabbe needs to play like it’s Minnesota every night. Terry Stotts must outcoach Steve Kerr. And, CJ McCollum must continue to collect broken ankles to hang above his fireplace.

CJ McCollum should be locked up for what he did to Victor Oladipo’s ankles pic.twitter.com/aU4a61RSBX

Just as important, the Blazers should embrace the notion that now, more than ever, anything is possible. Earlier this year, Portland was drowning 11 games under .500 before going on a 17-5 resurrection, owning the best record of any team since March 1. The Blazers started to believe in themselves once again. The swagger of last year’s team finally began to resurface and the prospect of playing the Warriors seemed more like a challenge than a death sentence.

Damian Lillard spoke of Portland’s newfound outlook for the playoffs. “We’re not going into the playoffs saying, ‘Hey we made it, let’s bow out gracefully and be happy with what we did. We’re going in there to take a swing. We’re coming in there to try and shock the world.”

And what a shock to the world it would be. 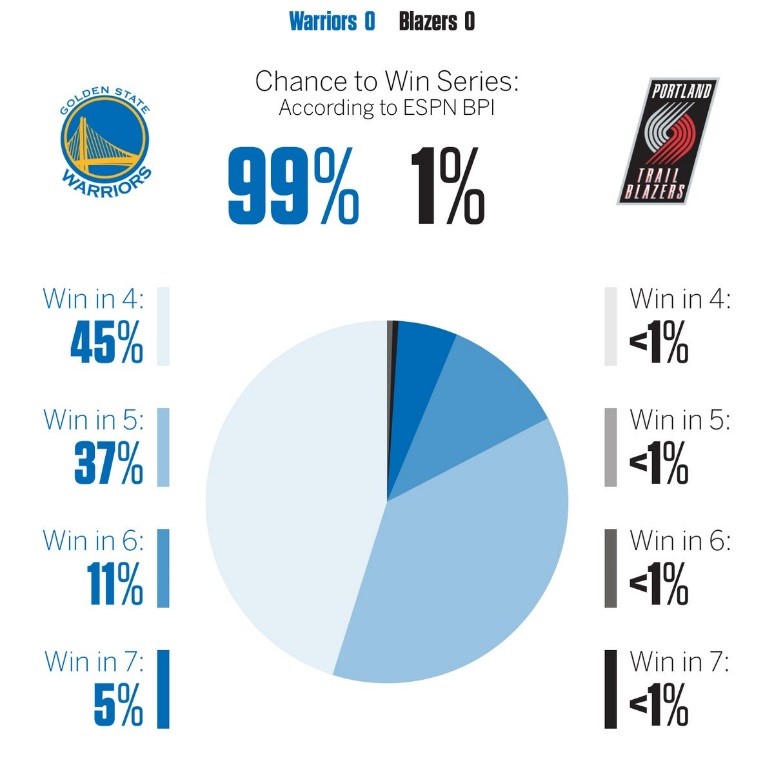 The Blazes are also 300-1 to win the championship.

Lillard, though he wasn’t entirely serious and his answer way overblown on social media, should have been completely serious about this:

Luckily, for the Blazers, we are living in an age of unsuspecting victories and WTF stories. This is a time when statistics and expert predictions mean absolutely nothing. If it did, Hilary Clinton would be President and the Warriors would be working on a three-peat.

Forget Vegas odds and season series results, none of that matters in this parallel universe we find ourselves in. What really matters is believing to the point of absurdity. The Blazers beating the Warriors? Why not? There are no rules here, anymore.

On Sunday afternoon, the Blazers will march into Oracle Arena as huge underdogs. Only five times in the history of the NBA has a number eight seed beaten a number one. If there is one thing this past year has taught us, it’s that the Blazers have the Warriors right where they want them. I’m with Lillard. Blazers in six.

For better or worse, the Portland Trail Blazers backcourt finds itself in the news every season. CJ McCollum has an annual invitation to hypothetical trade scenarios, but according to Bleacher Report’s Eric Pincus, it’s Damian […]

Zach Collins – What Can We Expect From The Young Fella?

The Portland Trail Blazers’ 2016-17 season was a year defined by high ambitions and unmet expectations. The team saw a regression to the mean after shocking the league just a year prior, but there is […]

Oregon Sports News provides fresh, local commentary on all of your favorite local, regional, and national teams, players, and events. Follow us today on Facebook and Twitter!