I know we’re only 20 games into the NBA season. There is still time for things to change, time for the Portland Trail Blazers’ most recent signings to be successful. Maybe, at some point in the season, I’ll look back and chuckle about how wrong I was. But, for now, I have to admit it; I am not digging the Kevin Calabro and Lamar Hurd experiment.

Maybe it’s just me. Maybe it’s just that change is hard. Thirteen years of Mike Barrett and Mike Rice being the faces and voices of the Blazers on television is a long tenure to have suddenly torn away without warning. Maybe with time, Calabro and Hurd will grow on me.

Maybe it’s partly due to the subpar play of the Blazers so far this year. It must be hard to keep up an excited and optimistic front while watching Portland be the worst defensive team in the league. Blowouts are difficult games for announcers to call to keep viewers entertained and interested. The Trail Blazers have had their fair share of being on the wrong end of lopsided games this year.

It could very well be, like the Blazers themselves, Calabro and Hurd just haven’t peaked yet. I doubt we were all sold on Barrett and Rice at first when they first began as a tandem, but they soon become a fixture of Blazers broadcasts and beloved for the most part. That being said, I miss Mike and Mike more than I thought I would. Apparently, I’m not the only one either, as a recent oregonlive.com poll asked fans how the new crew was doing. 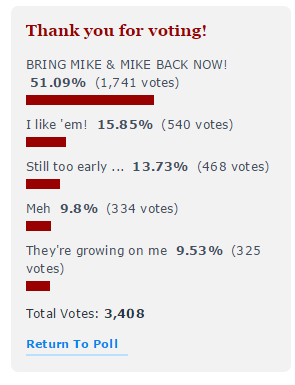 Listen, Calabro is fine. He is a professional with a genuine broadcaster’s voice and an experienced demeanor. But, that’s the problem. This is the Portland Trail Blazers, not the team formerly known as the Seattle SuperSonics, Calabro’s former employer. Portland is a city that prides itself in keeping things weird. We like odd-balls and outcasts. We like pretending to be a big city knowing fully well we never will be, so we act out occasionally with weekly scheduled riots, statements on doughnuts, and our announcers getting booted from basketball games. We like to be a little different because we are a little different. Barrett and Rice, whether you liked them or not, were quintessential Portland broadcasters and a perfect fit for the Blazers.

Barrett and Rice often wore their fandom on their sleeve. And you know what? I liked it when they emoted a little bit too much like fans. Because that’s what I wanted to listen to. They were our announcers. Our buddies at the bar narrating every play for us. I miss the “all of a sudden” optimism of Barrett. I miss Rice’s Rice-isms. Barrett was the Chevy Chase to Rice’s Randy Quaid, and it worked for over a decade. 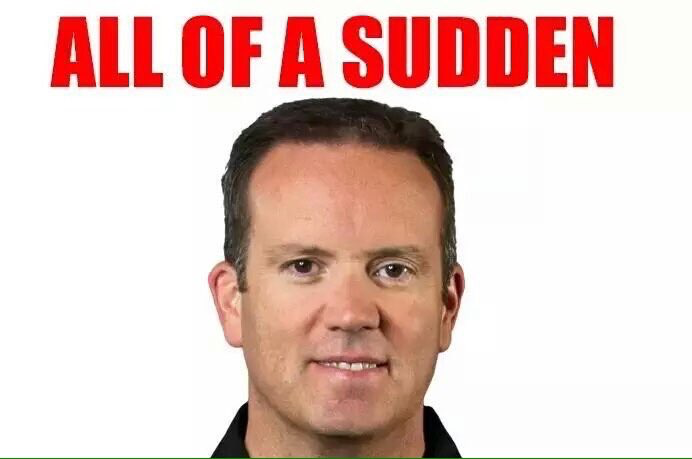 It used to be if the Blazers were playing simultaneously on ESPN and a local network, there would be no question on who I would listen to and which station I would watch. The Mikes won every time. Now, I’m not so sure. Calabro is a long time voice for ESPN radio and it shows, for good and bad. Having to be an impartial voice on national radio may have zapped some personality from Calabro’s play calling. I hope we gets some of it back as when he was calling Sonics games. 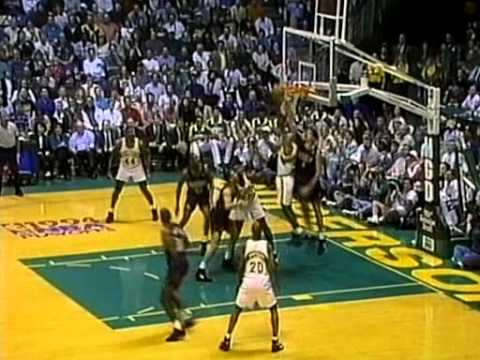 If listening to Mike and Mike was like walking into your favorite neighborhood pizza bar, Calabro and Hurd are the shiny new Bridgeport restaurant where the food is only questionably better, but the atmosphere, while more upscale, lacks the comfort and charm of the old hangout.

Perhaps, the Blazers wanted a little more professionalism and a little less attitude; to be seen more as grownups in an Association filled with big market teams that free agents shun us for. Calabro gives the Blazers just that. He is a highly respected, above-average voice in a sea of average talent. Portland is getting from Calabro exactly what it wanted from him, and kudos for the organization for that. I’m just not sure it’s what the fans want. Professionalism without emotion or attitude is overrated; just ask our president-elect.

I’ll give Calabro and Hurd more time before I judge too concretely. Hurd seems like a insightful and enthusiastic wing man to Kevin’s more old-school approach; if he and Calabro can build some decent chemistry, then perhaps something wonderful could be brewing in Portland.

As with the Blazers, I’ll be patient with this new broadcasting crew. Because, you never know when “all of a sudden” could happen.

Portland Trail Blazers Hoping To Execute On The Road This Week

The Portland Trail Blazers were able to bounce back handedly from their first loss of the season to the Washington Wizards in overtime, as they claimed their first road win against the Orlando Magic on […]

As the NBA ramps up for its return, a lot remains both up in the air and up for debate—namely, whether the league should even be attempting a comeback at this time. Putting that monumental […]

The Portland Trail Blazers and Denver Nuggets were tied for the 8th and final playoff spot in the Western Conference before Tuesday night’s action. The Blazers 122-113 win gives Portland a one game lead with […]

Oregon Sports News provides fresh, local commentary on all of your favorite local, regional, and national teams, players, and events. Follow us today on Facebook and Twitter!