On the evening of September 5th, the all-star point guard of the Portland Trailblazers made a dramatic announcement to the world via his Instagram account.

Damian Lillard — two-time all-star, 2013 rookie of the year, franchise cornerstone and the NBA’s most talented rapper — is now vegan.

Lillard’s announcement should’ve garnered the attention of all major sporting news networks that evening. It should’ve been the lead story on CNN’s nightly telecast and the victim of Skip Bayless’s psychotic daily rant. Instead, the lead story in sports on Sept. 5 was about the Boston Red Sox stealing signs from the Yankees using an Apple Watch.

One of the best players in the world announced he’s abandoning meat six weeks before the season starts, and the illuminati decided Apple Watches and baseball — the two most boring trends in America — were worthy of top billing in the New York Times. Even locally, Lillard’s dietary developments barely generated a peep.

Of course the vegetable-crazy city of Portland embraced Lillard’s decision to ditch meat. In 2016, PETA named Portland the most vegan-friendly city in America; if you’re going to come out of the vegan closet, there’s no better franchise to play for than the Blazers. But I’m here to convince you Damian Lillard becoming vegan six weeks before the start of the regular season is not a good thing.

On NBA.com, Lillard is listed at 6-foot-3 inches tall. If Lillard is 6-foot-3, then Greg Oden is better than Kevin Durant, and Portland is a conservative city. 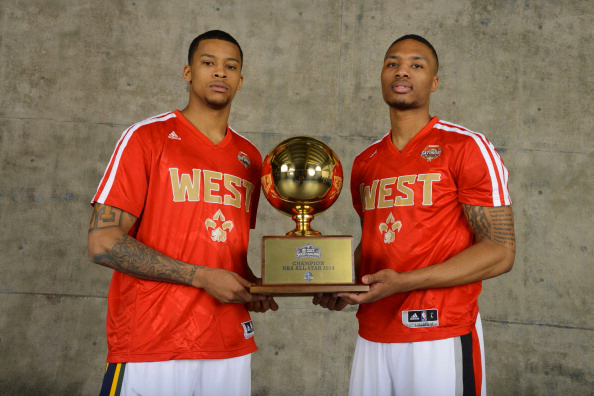 photo via Inside Hoops

Here’s Lillard (right) standing next to Trey Burke (left) at the 2014 all-star game. Burke is listed on NBA.com at 6-feet flat, and Lillard appears to be almost identical in height. This means Lillard is actually an undersized point-guard, and the ten extra pounds he plans on losing are contributing to a petite player becoming even smaller.

“But Dame is primarily a three-point shooter! He doesn’t need to be bulky to score from beyond the arc,” screams an increasingly nervous Blazers fan.

There’s no doubt Lillard’s greatest weapon is the three-point shot, but his ability to score at the rim is an underrated facet of his game. Over 37 percent of his field goals are attempted within 10 feet of the rim, and last year that number rose to 40 percent. That painted section of the court — where Lillard loves to score — is occupied by gigantic humans who happen to love eating meat. As the great American rapper Waka Flocka once said, “I go hard in the muthafuckin paint.”

Does losing 10 pounds automatically make an already small guard a less effective interior scorer? Of course not, but I don’t see how it helps.

History of Vegans in the NBA

Lillard isn’t the first NBA player to pledge their dietary allegiance to vegetables. Several players have come out of the vegan closet in the past few years, and the diet’s effect on performance has been substantial.

Amar’e Stoudemire is one of the more versatile, skilled big-men to play in the NBA in the past 15 years. Following a productive 2012 season, the 30-year-old Stoudemire announced he was going vegan. It did not go well.

Glen “Big Baby” Davis was once the most famous fat guy in the NBA. Big Baby admitted to the New York Times in 2006 that he loved eating Chips Ahoy cookies and Raising Cane’s. He was a violent low post player and fan favorite. And then, in 2013, he went vegan.

At 6-feet-10-inches and 289 pounds, Al Jefferson used his massive size and strength to become one of the NBA’s premier post-players and aggressive rebounders. His borderline overweight figure and unapologetic love for meat was celebrated by his fans. And then, in 2015, Jefferson listened to advice from a nutritionist on the Charlotte Hornets and went vegan. The numbers speak for themselves.

Are there instances where players find success after going vegan? Of course, but I would never include those in this column because it hurts my opinion.

In the past six years, the NBA’s Western Conference has become significantly more talented than the East, and no position is more competitive than point guard. Besides Lillard (who is between James Harden and Mike Conley on this list in my opinion), here are the eight best point guards in the West:

LIllard’s nightly defensive assignment includes guarding some of the most physically talented players in the league, none of which are vegan. Also, Lillard doesn’t have the luxury of playing alongside a lockdown defensive shooting guard like Curry, Westbrook, Booker and Murray all do. CJ McCollum — as gifted and terrific an offensive player as he is — is a minus defender, meaning Lillard is tasked with guarding the league’s most dynamic athletes every other night. At 6-feet, 190 lbs, Lillard is expected to not only lead his team offensively for 82 games, but also stop the opposing team’s best player. That’s a lot to ask of your star point guard.

The Portland Trail Blazers received great news earlier this month when it was announced by the team that Jusuf Nurkic would be able to take part in the rest of the 2019-20 NBA season. Nurkic […]

Is the NBA season winding down, or is it just heating up? There is a ton of drama and action around the league as final playoff spots are fought for, awards season is getting closer, […]