Nebraska. Tennessee. Arkansas. Oregon. Where would he land this offseason? In early December, WSU faithful came to the realization that their head football coach, Mike Leach, would likely be bolting for greener pastures. Without an Athletic Director or the budget of bigger programs, it seemed a long-shot that WSU would be able to retain their prized coach.

But here we are, in mid-December, with WSU just having inked Leach to a five-year extension worth $4 million per year. A 33% raise isn’t too shabby for the quirky ball-coach, especially in Pullman. Also included in the contract is a retention bonus, which dishes out an additional $750k if Leach stays in Pullman through 2020.  This equates to some considerable spending power in Pullman, which is a far-cry from the cities of Seattle and Los Angeles, where his Pac-12 coaching peers are hard pressed to find their next McMansion for anything less than a few million bucks. Having probably paid off his Pepperdine Law School student loans long ago, Leach is primed for a mid-life crisis and should be willing to go big this Christmas.

It’s been well documented that Coach Leach walks approximately four miles each-way to campus in Pullman. Not to digress, but the Pac-12 Network first aired a “Walking to Work” segment in August of 2015 and it is a real treat.

More than two years later, Fox College Football copied the idea for the segment, airing an awfully similar but slightly less entertaining version. It’s been rumored that Pac-12 Commissioner, Larry Scott, included the rights to the segment as part of the deal that put all WSU kickoff times in the middle of the night.

In both “Walking to Work” segments, Leach begins his walk from a new, yet conservative development in Pullman before meandering down some hills, through a cemetery, and into a couple coffee shops.  Unless Leach has a bunker underneath his home full of gold (he totally could), his house isn’t a burden on his budget. It’s hard to find a house for more than $500,000 within four miles of campus, so one can assume Mike probably bought this house by reaching into his wallet and pulling out a wad of bills from his time at Texas Tech. He has plenty of spending power as a multi-millionaire in Pullman, which leaves room to pursue his hobbies and be very generous this Christmas.

In terms of hobbies and interests, Coach Leach’s love of pirates has been well documented, as he routinely educates his players on Blackbeard, schools them on pirate teamwork techniques used on ships, and encourages them to “swing their sword.” If Leach were to live by his own words and swing his sword this Christmas, he would spring for the following:

Who doesn’t love a good pen? Leach’s wife could pay their bills in comfort and style with this beauty of a writing utensil. Leach should really go for something special this year for the Mrs., and this pen accomplishes that.

Leach has four kids and one grand-child. With more probably on the way in the next few years, he could instantly position himself to be the coolest grandpa of all time this Christmas. Have you seen the eBay commercials encouraging you to buy unique gifts this year? Coach Leach could star in next year’s commercials if he pulls this trigger on this personal amusement park ride. 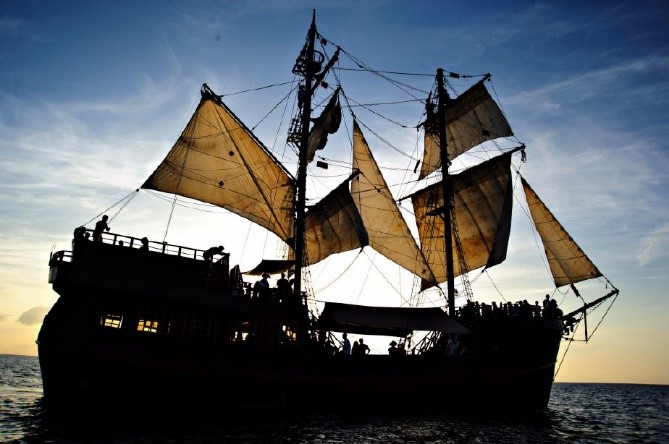 At 108’, this treasure would go a long way in recruiting for the ol’ ball coach. Already docked near his offseason home in the Florida keys, Leach could immediately compete for recruits with the big-boys in the SEC. If Leach had this a few years ago, it’s likely that Jameis Winston and Cam Newton both would have been WSU Cougars. If Leach really wants to go big, he could spring for a 216’ foot, three-mast model docked in New York for just over $4 million.  Being the saver that he is, it’s more likely Leach will opt for the bargain and keep it under a million.

About David Bigelow 15 Articles
David grew up in Gig Harbor, WA before heading to Spokane to pitch for the Zags. Over four seasons he reached second on the Gonzaga all-time saves list. He was also the closer for the Bellingham Bells of the West Coast League, helping them claim their first ever WCL Championship in 2014. Now living in Kirkland, WA, David and his wife enjoy hiking in the Cascades, watching sports (Go Zags, M's, and Hawks), and exploring the coast. They have two cats, Rocco and Stu, who keep them busy and make for great entertainment. Aside from writing, other hobbies for David include coaching high school basketball and baseball, mountain biking, and counting down the days until the next Zags Baseball Alumni Weekend.
Twitter

It‘s an age-old debate. Ground versus Air. And we’re not talking about how to ship your holiday packages.  The 2019 version of college football’s Cheez-It Bowl features contrasting styles of football. And that makes this […]

Northwest Players To Watch At This Year’s Senior Bowl

The Senior Bowl takes place midday Saturday in Mobile, Alabama and showcases senior football players from across the country, as they’re split into two teams coached by NFL coaching staffs. Team South is coached by […]

September 27, 2019 Paul Redman Seattle Seahawks Comments Off on Football In The Pacific Northwest Has Come With Many Bad Losses … And Some Hope To Boot

A few weeks into the football season, we are none the wiser about where the major teams in the Pacific Northwest stand. Each has, arguably, a bad loss on their record already, yet each has […]