When Jusuf Nurkic was traded from Denver last season, the Portland Trail Blazers pulled off the most one-sided heist of the season. Not only did they acquire a high-end starting center, Portland even convinced Denver to throw in a first-round pick. All they had to give up was Mason Plumlee — a player who played Nurkic’s position — and a cheap second-round pick.

Nurkic played terrifically last year after the Blazers snatched him from the Nuggets. He supplied the Blazers with an interior scorer who could screen for their talented backcourt, and he vastly improved their defense. The Blazers won 14 of their final 20 games with The Bosnian Beast and snuck into the playoffs.

Yet, the Blazers chose not to extend Nurkic to a long-term contract prior to this season. Nurkic is in the final year of his cheap rookie contract, and the Blazers had the opportunity to extend the big man to a lucrative extension, but the two sides couldn’t come to an agreement.

After this season, Nurkic will become a restricted free agent, and according to David Aldridge, teams around the league will be lining up to pay the 23 year old around $20 million per season for the next four to five years.

The Blazers should not be one of those teams.

The first reason Nurkic doesn’t deserve a lucrative, long-term contract is also the simplest and most important: he isn’t impacting games enough on a regular basis.

*Only includes the 20 games played with Portland

Nurkic has regressed from his breakout performance after being traded last year. If you compare the 20 games Nurkic played for Portland last season to the first 20 games of this season, he’s a less efficient scorer, he’s grabbing 2.7 fewer rebounds, he’s creating fewer shots for teammates and he’s playing fewer minutes. His defensive impact has also declined, as he’s recording fewer steals and blocks.

That stat line isn’t close to being worthy of a max contract in the NBA. If we take Aldridge’s prediction seriously — that Nurkic will earn a contract worth $20 million per season — here is the group of players making similar money:

Of course, all NBA general managers would agree that Nurkic is worth something between NBA-champion Kyrie Irving and four-time NBA All-Star John Wall (sarcasm)! If we adjust our expectations and lower Nurkic’s contract to $13 million per year, here is the new market:

That seems like the right group for Nurkic. He’ll be sharing a bunk with Kenneth Faried and Marcin Gortat — fellow big men that can’t shoot.

Thanks to some smart — and some incredibly stupid — contracts, the Trail Blazers are on the hook for over $112 million in guaranteed money through the 2018-19 season. 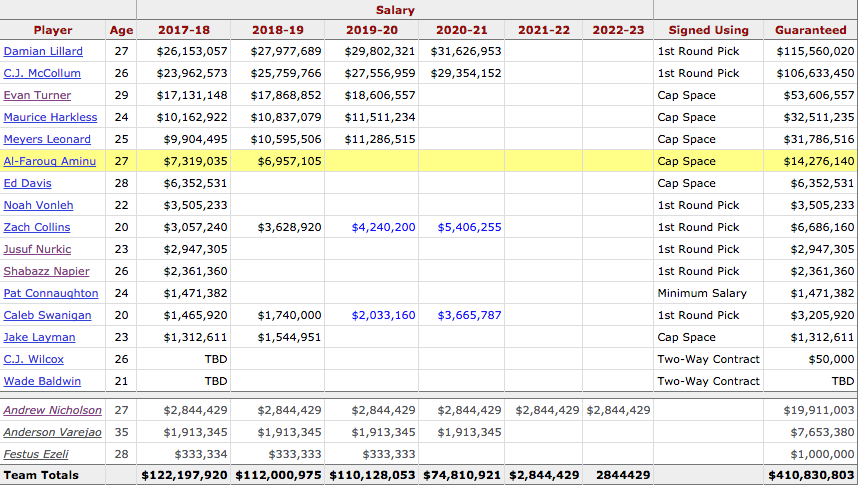 Teams are required to pay luxury tax penalties when their payroll exceeds $119 million. If the Trail Blazers would like to sign Nurkic to a long-term deal, they’ll need to either trade away Evan Turner, Maurice Harkless or Meyers Leonard (good luck), or Paul Allen is going to be paying luxury taxes out the wazoo for at least the next three years.

Furthermore, if the Trail Blazers end up signing Nurkic for $20 million per year, they won’t have the ability to improve their roster via trade unless the transaction brings their payroll below the salary cap.

In other words, they’re stuck with the trio of Damian Lillard, CJ McCollum and Nurkic without the ability to acquire additional assets. That nucleus is capable of solidifying a half-decade of deep playoff runs if Neil Olshey manages to surround it with a talented supporting cast. He hasn’t been able to do that because of the horrendous Evan Turner (about $17 million per year) and Meyers Leonard (about $10 million per year) contracts.

To say that Nurkic can’t shoot is an understatement. He has never made a three in his NBA career (0-11), and he shoots 36 percent on field goals more than three feet from the basket. He is a talented offensive player, but his skillset doesn’t resemble what teams are seeking in modern NBA centers.

Nurkic is a complete non-threat from outside the paint and a terrible shooter. If an NBA team is going to pay a center who can’t shoot $20 million per year in 2017, he needs to be a transcendent athlete (DeAndre Jordan, Rudy Gobert, Dwight Howard, Shaq Wilt Chamberlain), and Nurkic isn’t.

Pretend, for a moment, the Trail Blazers are in the Western Conference finals against Golden State. In a tie game with less than 10 minutes to go, can the Blazers play Nurkic against Golden State’s small, athletic lineup? Can they even play him against Houston’s lineup? The Warriors would expose Nurkic’s lack of speed with Steph Curry/Draymond Green pick and rolls until Terry Stotts is forced to pull him for a quicker defender. We saw this with Kevin Love in the finals last year; centers with an inability to switch onto guards are becoming expendable. Watch Joe Johnson send Nurkic to the floor with a crossover after Nurkic gets switched onto him:

That being said, Portland is a great defensive team this year because of Nurkic’s interior defense. Nurkic’s defensive rating of 99 ranks fourth in the NBA at his position, and his ability to chase down guards at the rim is really impressive for a seven footer.

Also worth considering: if the Blazers sign Nurkic to a long-term deal, where does that leave first-round pick Zach Collins? Portland traded the 15th and 20th picks in the draft to move up and draft Collins at number 10. It’s clearly too early to evaluate Collins’s future, but the rookie has been downright awful this season, shooting 11.1 percent and collecting just six rebounds in 32 total minutes.

Can Nurkic and Collins — two seven footers who rely on interior offense to score — play together in the modern NBA? “No way in hell,” says the Portland front office, and, “Yes please,” says opposing front offices. If the Blazers lock up Nurkic for four years, they’re basically punting on the Collins pick, as the kid’s playing time and opportunity to be the team’s future starting center takes a major hit.

If the Trail Blazers are going to sign a big-time free agent following this season, there are plenty of options with a more progressive skill set that could potentially play alongside Collins.

Faithful Trail Blazers fans who’ve seen countless free agents walk after successful stints in Portland will vehemently disagree with letting Nurkic sign elsewhere. They’re like hopeless romantics who are tired of being dumped by their girlfriend every six months.

But don’t let desperation cloud your judgment; Nurkic’s lack of elite production and skills — along with the Trail Blazers lack of cap room — make signing Nurkic to a lucrative contract not just foolish, but unrealistic.

November 21, 2017 Jack Rieger Portland Trail Blazers Comments Off on Why Portland – Not Oklahoma City – Was The Perfect Destination For Carmelo Anthony

Carmelo Anthony’s career trajectory is nearly impossible to explain to a casual fan of the NBA — hell, even a rabid fan. As a freshman in college, he led Syracuse to their first and only […]

Which Portland Trail Blazers Would Have A Claim To The Iron Throne?

Will The Portland Trail Blazers Make The Playoffs?

The weather is clearing up in Portland earlier than usual, great news for someone who loves his gardening (raises hand). The sun starts to shine, the light breezes tantalize with the scent of growth instead […]