Over the past two weeks or so, Seattle Mariners GM Jerry Dipoto has been the subject of web articles, podcasts, and television segments about his propensity for swapping out pieces of the roster for, what on the surface often looks like, similar pieces. Who can take an outfielder and turn him into a pitcher and then take that pitcher and turn him into an outfielder? Jerry Dipoto can.

The most scholarly analysis of the madness which is Jerry Dipoto’s trade machine comes from Jeff Sullivan at FanGraphs, who magnificently charts Dipoto’s activity against the rest of the league using publicly available data from Baseball Reference. The result is truly stunning. 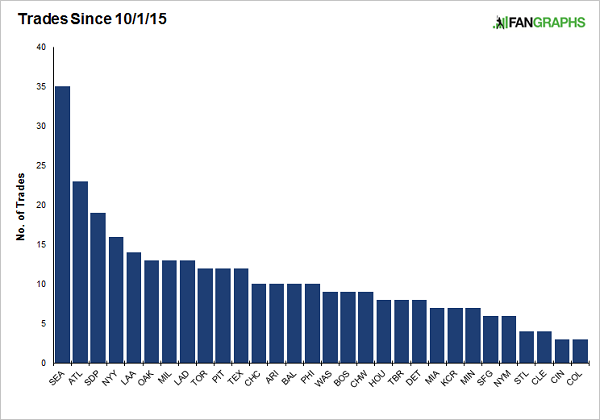 During roughly a sixteen-month stretch that nearly perfectly corresponds with Dipoto’s tenure in the Mariners front office, only one other team in major league baseball has executed even twenty trades – the Atlanta Braves. There are even a handful of teams with fewer than ten trades over that period of time. But, Jerry Dipoto has managed thirty-five.

The absurdity of the trade discrepancy between the one team in the Pacific Northwest and the twenty-nine teams in the rest of the country has become a regular segment on The Ringer MLB Show podcast, hosted by Ben Lindberg and Michael Bauman. Each week for the past three weeks, Lindberg and Bauman interview long time Mariners fan Meg Rowley, who writes for Baseball Prospectus, to ask the pressing question, “What Did Jerry Dipoto Do?”

The segment is complete with a jingle that will get stuck in your head – search “What Did Jerry Dipoto Do?” on Twitter for confessionals from victims of the catchy ditty. This last week, Rowley called in for all of fifteen seconds to inform listeners that Jerry Dipoto had made no trades. Now that’s funny.

During this offseason, I’ve resisted the temptation to analyze any of the Mariners moves, mostly because it never seemed certain that my column wouldn’t be obsolete by the time it was published. Case and point, on January 16th the Mariners acquired OF prospect Mallex Smith from the Atlanta Braves. A few HOURS later, Smith was part of a package that brought Drew Smyly to the starting rotation from the Tampa Rays.

Now the truly snarky might quip something like “couldn’t the Rays just talk to the Braves?” And technically the answer is yes they could. But maybe the Braves liked what they got from the M’s better. Maybe the Rays didn’t want to give up what the Braves were asking, etc., etc.

What is fun to speculate about, though, is the importance of Dipoto in the middle of the negotiating. Do other GMs around the league think to themselves, “this must be a good deal if Jerry is involved” or do they think “oh good, another chance to fleece Jerry.”

Last season Dipoto’s tinkering produced an 86-76 team on the cusp of wild card contention. One could easily argue that the currently configured roster (which can change) is more athletic and better defensively in the outfield with the potential for offensive improvement at shortstop by adding Jean Segura. First base has some questions and the rotation is iffy at best. But add another three wins and there very well could be baseball in October in the Emerald City.

Whether you think Jerry Dipoto is mad or you think he’s a genius, he’s always entertaining.

About Brian Hight 97 Articles
Brian Hight lives in Seattle and writes primarily about MLB and the local Seattle Mariners, with a focus on advanced analytics. Occasionally, he delves into the NFL and the NBA, also with an emphasis on advanced statistics. He’s currently pursuing a Certificate in Data Analysis online from Microsoft, where he hopes to create a prediction model for baseball outcomes for his capstone project.
Twitter

Spring Training Is Here, But What Are ‘Non-Roster Invitees’?

Pitchers and catchers for the Seattle Mariners reported to Peoria, Arizona earlier this week for the start of what hopes to be an exciting season for the American League West squad. Familiar faces such as […]

Slumming It At Safeco Field

Every baseball season since my wife and I moved to Seattle, a little over five years ago, we have made a point to attend at least one Seattle Mariners home game, usually a mid-week day […]

Following a home series loss to the Houston Astros, the Seattle Mariners record settled in at 72-56 for a .563 winning percentage. That winning percentage projected out over the whole 162 game season would capture […]