The Portland Trail Blazers have become one of the more mercurial teams in the NBA. One moment they’re down 18 points to the Philadelphia 76ers; the next, they’re pulling off a 42-25 fourth-quarter comeback.

On Tuesday, the team from the Pacific Northwest entered halftime on the road against the Cleveland Cavaliers up three. Then the second half came along, and…well…

In tough times, it’s important to laugh. And while these are far from what anyone reasonable would call the worst of times (see: Memphis Grizzlies), the Blazers sit in seventh place and find themselves just 1.5 games from being outside the playoff picture.

So while some will use our recent collective breakthrough into the year 2018 as a time to analyze, critique and look into crystal balls, we say…forget that.

It’s time to put the “fun” back in “basketball.” 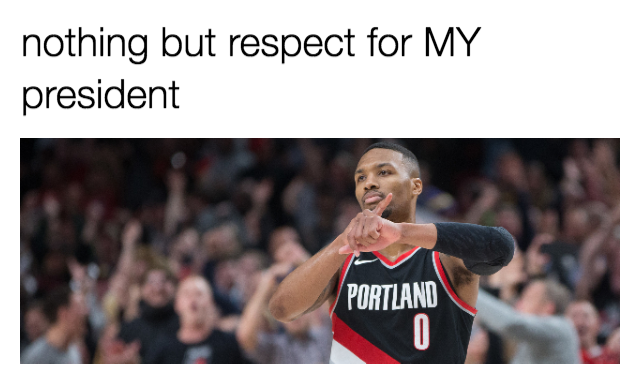 We owe Twitter user Makenna a huge thank you.

No, not for cleaning 45’s Hollywood Star. Forget that noise.

We owe her our sincerest gratitude for accidentally giving us one of the best memes of 2017.

Stopped to clean @realDonaldTrump Hollywood Star. Nothing but respect for MY President. #RaisedRight pic.twitter.com/jL4sqx4rlh

So far this season, only four players have at least three games of (at least) 30 points and nine assists. You’ve already guessed correctly: Lillard is one of them. His fellow studs? Those guys would go by the names of LeBron James, Russell Westbrook and James Harden.

It’s true that Lillard’s efficiency has decreased on the offensive end, but he continues to be a leader, is an improved defender and should make his return to the All-Star Game.

Now, he’s finally healthy and back on the court. Which means he’s already got my vote for 2020. 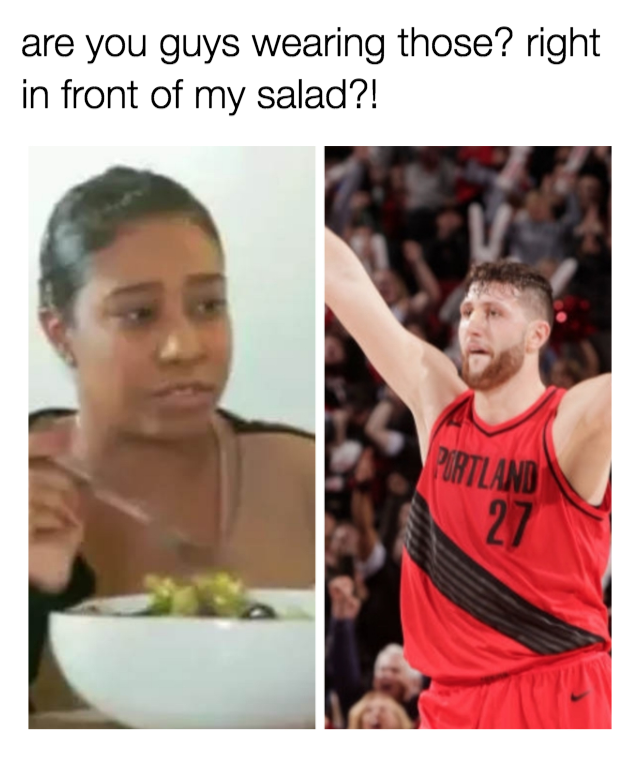 We’re not going to go into where this meme comes from. And we’re surely not going to link to it. If you’re curious, Google it with extreme caution.

What we are going to go into is all of the things Portland’s “Statement” jerseys make us think of:

Welp…as it turns out, that’s not a very expansive list. And it’s not very flattering, either.

If the team were at least winning in these things, that’d be acceptable. After all, winning solves just about everything in this league, including new uniforms that are just difficult to get used to.

But they’re not. Remember that Sixers game we already mentioned up top? That was the team’s first victory in these monstrosities following an earlier 0-4 stretch.

Start piling up the Ws in these unis, and I just might come around. Otherwise, I’ll count down the days until the team finally reveals these beauties. 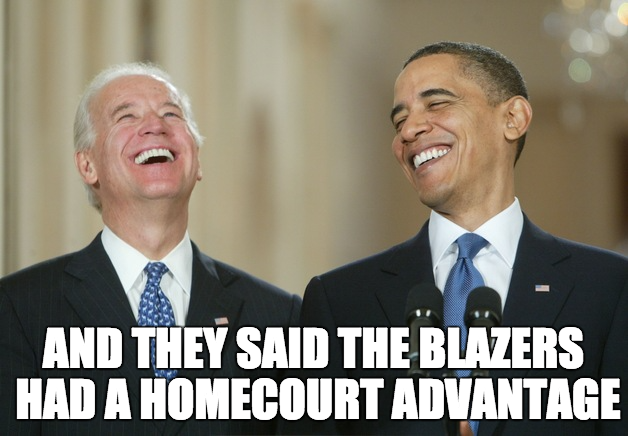 This one’s a bit harsh considering Rip City’s outstanding reputation, but we can’t ignore the fact that the Blazers have been atrocious at home this season. (Or at least atrocious by any playoff competitor’s standards.)

Before their Dec. 28 win over the Philadelphia 76ers, Portland hadn’t won a game at the Moda Center since Nov. 18. That’s an almost unbelievable stretch of losses, especially considering the team was 25-16 in its own venue last season.

Odds are, the Blazers will figure it out. The fact is, Portland does still have one of the best homecourt environments in the NBA. But they have to figure it out soon. The current 8-10 record in the arena forever formerly known as the Rose Garden isn’t going to cut it. No other playoff team is below .500 in their own comfy confines, and both the Los Angeles Clippers and Utah Jazz—two teams outside the top eight, but still in the mix—have been able to rely on their home courts far more reliably this season 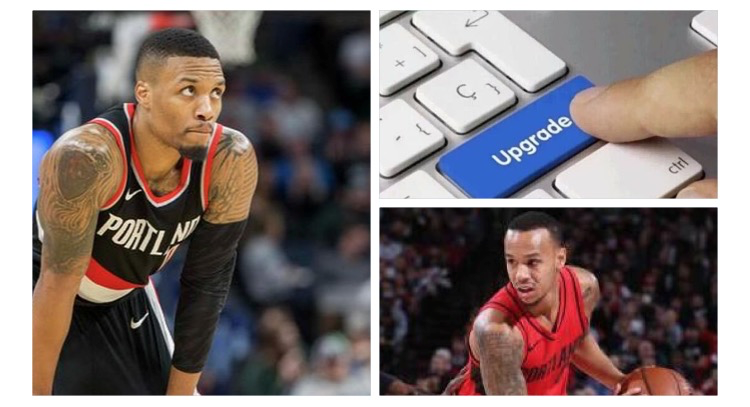 Nearly halfway through the year, it’s time for Beas to step aside.

Shabazz Napier has been one of the sneakiest underrated players through the season’s first half. He’s embraced his role off the bench, he’s stepped in for Lillard as needed and he’s shown he can be a 20-points-per-game scorer when given the chance.

Back in November, Bleacher Report ranked Napier as having the fourth-best contract among point guards. In December, they named him the most improved player on the Trail Blazers this season.

For the stans out there already drafting their hate mail for even joking about Lillard being a downgrade from Bazz, let me direct you to Thisisjustameme@aol.com. This isn’t Lillard slander; it’s legitimate recognition for someone who’s struggled to find himself throughout his pro career.

Although you know the former UConn star still has ambitions of starting in this league, he’s continuing to improve his game and get comfortable in a city that embraces him.

If you’re Portland, you can’t ask for anything more than that.

Sometimes, you just need to rant about certain sports topics. But, sometimes ranting can turn into long winded tantrums. And nobody wants to read that. With that, I am pleased to bring you my first […]

Is It Already Time For The Portland Trail Blazers To Make A Win-Now Trade?

The Portland Trail Blazers are, once again, in the midst of an injury crisis. Franchise stalwarts CJ McCollum and Jusuf Nurkic are both out for weeks to come, along with franchise icon Damian Lillard and […]

When it was announced Tuesday morning that the Seattle Seahawks were trading Russel Wilson – the best quarterback the franchise has ever had – to the Denver Broncos, it signaled the end of an in […]