Knucklehead Fight Promotions had made quite a name for themselves in a span of 5 years, building themselves up to being the biggest MMA promotion in the Salem area. In those 5 years, Knucklehead had put on a total of 16 shows.

In 2016, Billy walked away from the promotion scene, not knowing if he’d ever return.

“I decided to step away and spend more time with my family. Get some stuff done. So I bought a boat, and enjoyed being with my family,” Billy remarked.

You can’t blame him at all for this choice. Being a promoter can easily take over your life. It’s a nonstop process, with endless twists and turns. It starts with the matchmaking, then making sure the fighters have their licensing/medicals/injuries, hoping the fighters make weight. The list is ongoing. And after fight night is finished, you start the process all over.

But after 2 years, Knucklehead is rising out of the ashes and returning once again. Being put on once again by Billy, Austin, and Ray, Knucklehead looks to come back with a bang! When PortlandMMA asked why they decided to jump back in and start it back up, Billy replied, “I just missed it. I called and talked to the guys (Austin and Ray) and everyone was ready to do it!”

The location of their event might throw you off a little bit, hearing that it’s in a high school gymnasium. Usually, MMA is one of the last things you’d hear about going on at your local high school. But Knucklehead had been putting on their events at Dallas High School for many years. But it’s not so easy getting permission to get a Mixed Martial Arts event at any school, but a lot of good has come from it.

Since it’s been almost 2 years since an event, the school district has gotten a new superintendent.

“It wasn’t that hard to convince the new superintendent,” Billy said. “The school (Dallas High School) talked to them and I explained how many rules are actually are to the sport, they were on board right away. Plus, it’s a big help to the school. We’ve raised $80,000 (total) to help the schools. This year, the school is hoping to get new turf for their field. So all the money that’s donated (from this event) will go towards helping with that and their wrestling program.”

Saturday’s event will hold two pro fights and one amateur title fight to nail in the Main Card. Denny Linton faces Gustavo Bessa for the 145lb Pro Main Event. Denny Linton, after 3 years, is jumping back into the cage. Hoping to capitalize on his last win at Knucklehead 10, Linton should keep this fight standing to keep the advantage over Bessa. While Bessa just competed at SUG 7, it’s been 2 years since being in the cage. Gustavo Bessa would be wise to show off his ground game at Knucklehead 17 to get the submission. Jason Lambert Vs Jose Rico brings in the 170 lb Pro Co-Main Event. Jason Lambert should have a big upper hand over Jose Rico. The experience and expertise should equal a win for Lambert. Jose Rico should shoot for a quick finish of Jason Lambert. The later rounds might be trouble with Lambert’s experience. In the amateur 125 lb title fight, Alex Castaneda takes on Richard Carranza. The No. 2 flyweight in the Pacific Northwest, Alex Castenada is facing the No. 1 flyweight fighter, Richard Carranza. Alex Castenada has quickly came upon the scene. Training along side with fellow fighter Keaneo Moyer, Alex has moved up the ranks quickly, with no slowing down in sight. This will definitely be Alex’s biggest test to date going up against Richard Carranza. Richard Carranza, has finished his opponents by submission in his last 4 wins. Carranza will look to keep his #1 position by keeping the fight on the ground.

The event is located at: Dallas High School – Dallas, OR

Doors open at 6pm with the fights starting at 7pm. Tickets are still available starting at $25 ($30 at the door) for general admission. GA will get you any seat in the house up to the second row. Front row tickets, which are reserved, are $60 ($65 at the door). 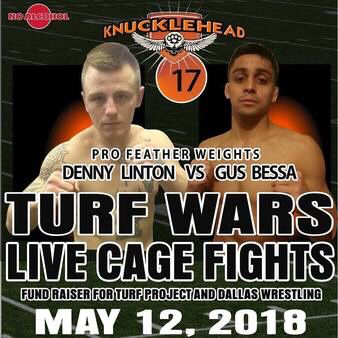 The Writer And The Fighter – Episode 31

May 15, 2019 David Golden Combat Sports, Podcasts Comments Off on The Writer And The Fighter – Episode 31

On this episode of, The Writer and The Fighter, Oregon Sports News Senior MMA Writer David Golden and Bellator MMA fighter Jake Smith discuss the wild weekend that was and provide some insights on the […]

August 2, 2018 David Golden Combat Sports Comments Off on Demetrious Johnson Is Back In The Cage At UFC 227 This Saturday Night

This Saturday night, the UFC returns to the Staples Center in Los Angeles, California for UFC 227. This card features some of the finest fighters from the smaller weight classes in the UFC. Ten out […]

The Writer And The Fighter – Episode 10 – Bellator, UFC, And The Return Of Chad Mendes!

July 17, 2018 David Golden Combat Sports, Podcasts Comments Off on The Writer And The Fighter – Episode 10 – Bellator, UFC, And The Return Of Chad Mendes!

On this episode of The Writer and The Fighter, Oregon Sports News Senior MMA Writer David Golden and Bellator MMA fighter Jake Smith get together to discuss all the action from the weekend’s barrage of […]