Colby Covington is one of the most promising young talents in the UFC. Following graduation, the former state champion wrestler from Thurston High School in Springfield, Oregon would go on to win a junior college national title before transferring to Oregon State University. While at Oregon State, he would become an All-American and two-time Pac-12 champion. With a tremendous wrestling background and a desire to be a champion, Covington was on the fast track to a UFC career. Once signed to the UFC, he showed consistency and dominance compiling an 8-1 record inside the Octagon. The numbers don’t lie when it comes to Colby Covington; the only problem is people seem to be talking more about his interviews than they are his fights.

Following his win at UFC Fight Night 119 last Saturday in Brazil, Covington went on a rant that would not only insult the people in the arena but many of the fighters from his gym. Playing the heel (bad guy) is nothing new for him but his playfully angry calls outs are usually a bit more tactful and bit less insulting than they were on Saturday night. When interviewed in the Octagon following his dismantling of UFC mainstay Demian Maia, Covington attacked the crowd before turning his attention to UFC welterweight champion, Tyron Woodley.

“Brazil you’re a dump, all you filthy animals suck! I got one thing to say, Tyron Woodley I’m coming for you!”

This may seem like a harmless attempt to play the bad guy, but Brazilians are a notoriously prideful group, and many have expressed their frustration with Covington’s words. His own teammates were immediately critical of him. UFC Champion Amanda Nunes, UFC lightweight Will Brooks, and former UFC heavyweight Antonio “Bigfoot” Silva all weighed in on Covington’s comments, calling them disrespectful, dirty, and racist. After the fall out from his interview Covington decided to issue a “Formal Apology” on twitter. 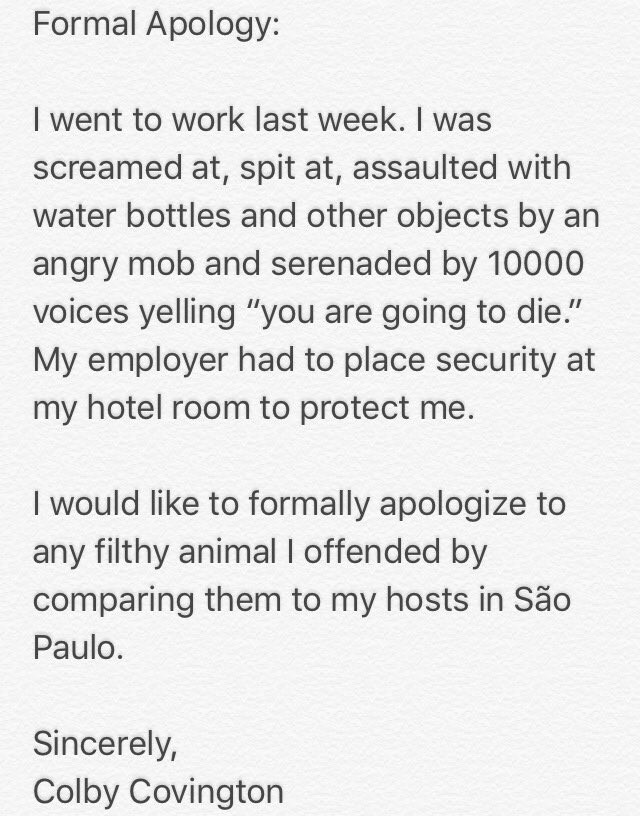 If Covington wanted to be hated by a remarkably large group of mixed martial arts fans, he struck pay dirt with his antics. That being said, he has found a way to dominate the headlines the same week that the UFC is holding one of its biggest cards of the year and that is no easy task. With the UFC return of Georges St. Pierre just 4 days away, it’s hard to believe that Covington is still one of the hottest topics of the week. This may be due in part to the controversy with his teammates, but it certainly gets more attention because of the way he dominated 2-time UFC title challenger Demian Maia.

Covington has proven he belongs at the top of the list of potential title challengers for UFC welterweight champion Tyron Woodley. He has the wrestling chops to outwork Woodley and an aggressive style that could force him into a brawl. These two scenarios favor Covington and would make for a matchup any fight fan would love to see. Add to that a built-in tension of the two being former teammates and you have a pay-per-view headlining matchup. Is it possible that Covington just talked his way into a title fight? Maybe. Is it more likely that he was one or two fights away from a shot at the title anyway? Absolutely. Whether Covington wants to keep up his antics and play the heel or go squeaky clean the simple fact is, the numbers don’t lie; he is ready for his title shot and his on-mic persona doesn’t change that.

The Writer And The Fighter – From Liddell/Ortiz To Jon Jones, What A Strange Week

November 28, 2018 David Golden Combat Sports, Podcasts Comments Off on The Writer And The Fighter – From Liddell/Ortiz To Jon Jones, What A Strange Week

On this episode of the Writer and The Fighter, Oregon Sports News Senior MMA Writer David Golden and Bellator MMA fighter Jake Smith break down some of the weird goings on in the MMA world […]

On this episode of The Writer and The Fighter, Oregon Sports News Senior Writer David Golden and Bellator MMA fighter Jake Smith break down the main card of UFC on FOX 30. It was a […]