Carmelo Anthony’s career trajectory is nearly impossible to explain to a casual fan of the NBA — hell, even a rabid fan. As a freshman in college, he led Syracuse to their first and only National Championship, averaging 22.2 points and 10 rebounds. He was drafted third overall by the Nuggets in 2003 behind LeBron James and Darko Milicic. The next year, he transformed Denver from tied for the worst record in basketball (17-65) to 43 wins and a playoff appearance. He is a 10-time All-Star, six-time All-NBA, three-time gold medalist, the 2012-2013 scoring champion and USA Basketball’s all-time leading scorer.

Yet, he’s mostly considered a disappointment.

Anthony has been traded by the Nuggets and the Knicks, both of whom improved after he left. He’s been accused of mailing it in defensively and playing a selfish style of offense. He was charged with “driving while ability-impaired” in 2008. He’s had very public feuds with coaches George Karl and Mike D’Antoni, and he’s only won three playoff series in 14 seasons.

And despite his personality flaws, he has the potential to transform a good team — like Portland — into a championship contender.

In the offseason, the Knicks were shopping Anthony around the NBA like an old pair of skis, and the Blazers were one of the few teams repeatedly mentioned in trade rumors. Both Damian Lillard and CJ McCollum openly recruited Anthony on social media; McCollum even posted a picture of Anthony on Instagram photo shopped with a Blazer’s jersey.

Anthony has a no-trade clause in his contract, meaning he had to approve the trade before the Knicks could pull the trigger. When New York asked Anthony if he’d consider Portland, he declined. According to New York Times reporter Marc Stein, Anthony turned down Portland because it was too far from his family in New York. On Sept. 25, New York traded Anthony at a steep discount to Oklahoma City for Enes Kanter, Doug McDermott and Chicago’s 2018 second-round draft pick. Despite their immensely talented frontcourt, Portland missed out on a superstar player — this time because of a supposed geographical disadvantage.

Sixteen games into the season, Oklahoma City (7-9) is off to a disappointing start, and the All-NBA trio of Anthony, Russell Westbrook and Paul George is struggling to gel offensively. Anthony’s offensive numbers are down across the board, which is to be expected when joining a more a talented roster. But you would think more surrounding talent would make Anthony a more efficient shooter, except the opposite has happened.

Portland’s (10-7) start to 2017 has also been underwhelming, with Friday’s loss to the lottery-bound Sacramento Kings representing the low point. Surprisingly, the Blazer’s offense has been their weakness; in the last 11 games, Portland has averaged just 98 points. Besides Lillard, McCollum and Nurkic, Portland doesn’t have an offensive weapon capable of carrying the team through long stretches. You know who would space the floor, knock down open threes and could carry the offense for long stretches?

There’s no evidence to support this claim, but I’m going to discern Carmelo’s decision to play in Oklahoma City was roughly 10 percent based on location and 90 percent because he thought joining Westbrook and George gave him a better chance to win a title than Lillard and McCollum. Anthony — whose career has been defined by questionable decision making — failed to recognize how awkward the trio would be; Westbrook is a ball dominant point guard with a career 31.3 percent shooting percentage from three, meaning he isn’t a natural floor-spacer. And Paul George — the third piece to the puzzle — plays the same position as Anthony.

Conversely, Portland is a perfect fit for Carmelo, especially on the court. Lillard and McCollum space the floor better than any backcourt in the NBA besides Golden State, creating a plethora of open looks for other scorers. The Blazer’s problem is they don’t have the outside shooters to benefit from Lillard and McCollum’s excellent floor balance. Insert Anthony, who would take more catch-and-shoot three pointers than he would know what to do with.

That roster is hosting a first-round playoff series and potentially provokes Stephen A. Smith to perform a three-minute monologue involving spit and made-up words.

Side note: Are we sure it’s too late for Portland to trade for Anthony? If both Portland and Oklahoma City are hovering around .500 at the all-star break, the Blazers should offer their 2018 first-round pick, Evan Turner and Maurice Harkless for Carmelo.

Beyond the on-court reasons, the Trail Blazers could provide the organizational stability for Anthony to rejuvenate his career. Terry Stotts would be the best coach Carmelo has played for professionally (yes, including D’Antoni and Karl), and the Blazers’ data-driven front office could seduce Anthony into turning his inefficient, long twos into threes. Oh, and Anthony won’t have to worry about reporters asking if he’ll come off the bench.

Carmelo Anthony was asked about the possibility of coming off the bench and his reaction was hilarious. ? https://t.co/NG3Hvv7s64

Along with basketball mismatches, Carmelo has yet to live in a city that complements his easygoing, yet adventurous personality. The bright lights and confrontational media in New York never seemed conducive to Carmelo’s laid-back demeanor, and Oklahoma City — a town notorious for its National Cowboy and Western Heritage Museum — is not exactly suitable for a rich, 33-year-old celebrity. 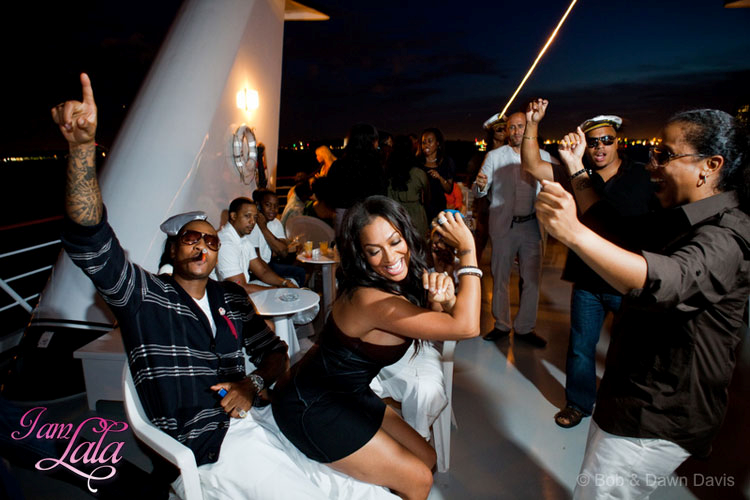 This picture was not taken in Oklahoma City (Via Ballislife.com)

Now presenting Portland, OR: a city where you can find a nightclub and a dispensary in the first floor of the same apartment building. Imagine Anthony, Lillard, McCollum and Jusuf Nurkic being applauded by fans as they walk into Fifth Avenue Lounge on Friday night like The Beatles of the Pacific Northwest. And speaking of dispensaries, Anthony was cited for marijuana possession in 2004 when TSA found weed in his backpack. Carmelo wouldn’t have to blame an out-of-town-friend for leaving weed in his bag if he joined Portland; it’s as legal in Oregon as travelling is in the NBA.

Unfortunately for Carmelo Anthony and the Portland Trail Blazers, we may never get the opportunity to witness the potential greatness of hipster Melo. The last couple chapters of Anthony’s career will be the ones that ultimately decide his legacy. Will he go down as an ultra-talented, but selfish player who never made the finals, or will Anthony end his career with an organization — and a city — that not only gives him a chance to win a title, but also represents his personality?

If it’s yes to the latter, the Trail Blazers are available.

The Portland Trail Blazers will host the Oklahoma City Thunder on Sunday in Game 1 of the 2019 NBA Playoffs, and while the basketball world at large will have eyes for Damian Lillard vs. Russell […]

When the Portland Trail Blazers traded for Jusuf Nurkic on February 13th, 2017 not a ton of people knew who the 7-footer was. That changed very quickly in Rip City. During the month of March, […]

For most of the past decade, the team has been good but not good enough. They’ve been a perpetual playoff team but never a true title contender. After yet another first-round playoff exit, they have […]