During the winter months, Portland is home to the most depressing weather in the United States. The sun doesn’t rise until you’re driving into work, and it sets before you get home. When the sun is briefly available, it’s almost always covered by a relentless, dark film of clouds. Light rain drizzles endlessly over the population of pale, sun-deprived Oregonians.

It stays like this. For seven months a year.

It’s Thursday, Nov. 30, and I’m standing in line to get into the Moda Center. The weather is even more depressing than usual, with heavy rain, wind and a temperature south of 40 degrees. Parents are covering loved ones with windbreakers, and groups of desperate fans are running for cover. Yet, despite the horrific conditions, there is a buzz around the stadium. Everyone is happy to be waiting in line because they know they’re going to see something special tonight.

The Greek Freak is in town.

Giannis Antetokounmpo — better known as The Greek Freak — is unlike any player in NBA history. He is 6 feet 11 inches tall. He is the Milwaukee Bucks’ primary ball handler. He has excellent court vision. He is a defensive monster. He is one of the five best players in the league. He is 22 years old.

We get it Giannis. You're good. pic.twitter.com/kdngMhmLLp

This season, he’s made the leap from potential superstar to MVP candidate. The Greek Freak is averaging 29.4 points, 10.3 rebounds 1.8 steals and 1.8 blocks per game. The only other player to ever average those numbers for an entire season is…

David Robinson fell just short of Antetokounmpo’s 1.8 steals in 1993-94 on his way to the scoring title, per basketball reference.

As I’m standing in line — on the verge of freezing to death — everyone’s buzzing about seeing Giannis. After security politely pushes me through the metal detector and pats me down, I’m finally inside the arena. I immediately dart to 10 Barrell — one of the breweries that make the Moda Center uniquely suited for NBA fans who are also alcoholics. 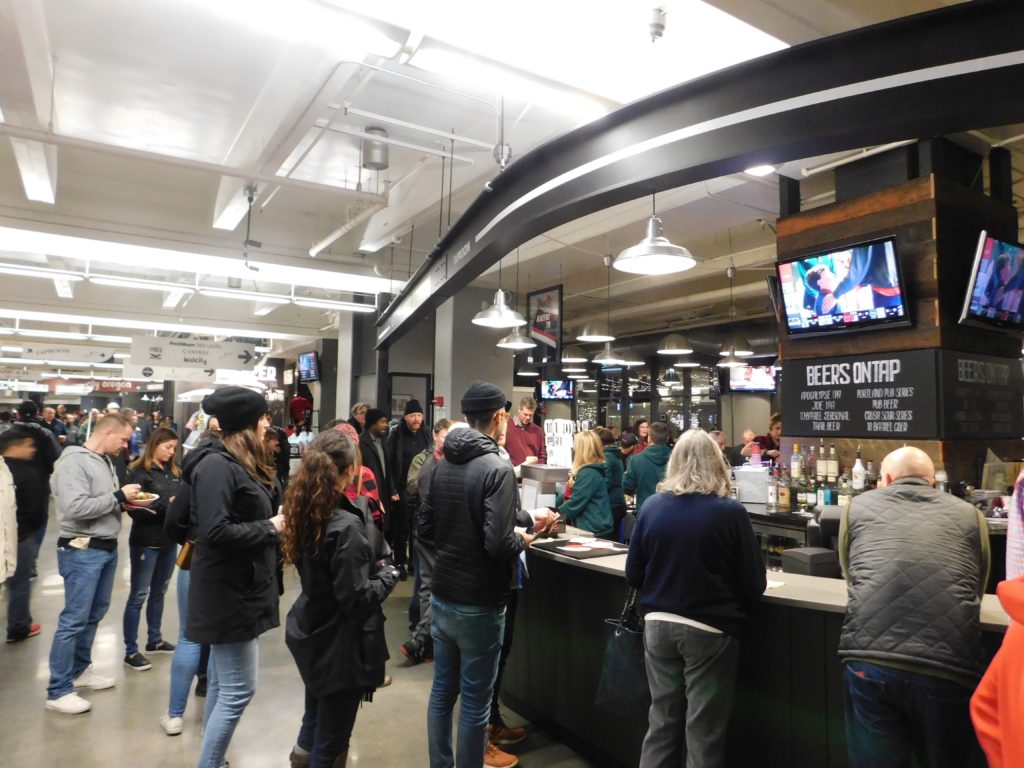 I took 12 photos. This was the best one.

I’m greeted by a friendly, bald bartender named Dan, who encourages me to try a dark winter ale called Pray for Snow. It’s bitter, dark brown and 12 fucking dollars. But tonight, money doesn’t matter because I’m going on a date with The Greek Freak.

I enter the lower bowl of the arena with my tall cup of beer and begin walking down the stairs toward the court. Tonight, I have really good seats (row H) thanks to my girlfriend, who is a cheerleader for the Blazers.

If I could go back in time and tell my 12-year-old self that I would end up dating an NBA cheerleader, I’d probably shit my pants with joy. It’s absolutely the coolest thing I’ve ever done. Until tonight.

As I sit down in my seat, I realize I’m surrounded by rich, old white men who seem surprised to see someone so young and full of life in their section. That’s right fellas; I’m in the club now. Then, I see him.

He’s in the layup line — just like the rest of the Bucks players. Except, he’s different. He’s longer, more athletic and better looking. I can’t stop looking at The Greek Freak. Unlike most seven footers, Giannis actually looks comfortable in his unusually lengthy frame. He’s like a stretched out version of Russell Westrbook — freakishly explosive, coordinated and chiseled. A woman in the row in front of me looks to her friend and whispers, “He’s hot.” She’s right. All of the sudden, I’m forgetting about my NBA-cheerleader girlfriend.

The ball is finally tipped, and the Bucks get off to a quick start. The Greek Freak matches up defensively against Noah Vonleh and acts as the Bucks’ offensive initiator. He’s a matchup nightmare, and he uses his quickness and length to flush home a dunk near the end of the first quarter.

By this point, beer number one is nearly finished and I’m already feeling a slight buzz. I’ve been working a corporate job for about nine months, and all I had for dinner was one measly, Chipotle taco. In other words, I’m a complete liability. The better Giannis plays, the more I want to drink. This could get dangerous.

The first quarter comes to a close when Khris Middleton drains a three at the buzzer, and I immediately head for brewery number two: Widmer Brothers. Widmer is bigger and a little more sophisticated than 10 Barrell. I’m joined by fellow fans who are also intoxicated by The Greek Freak’s athleticism. 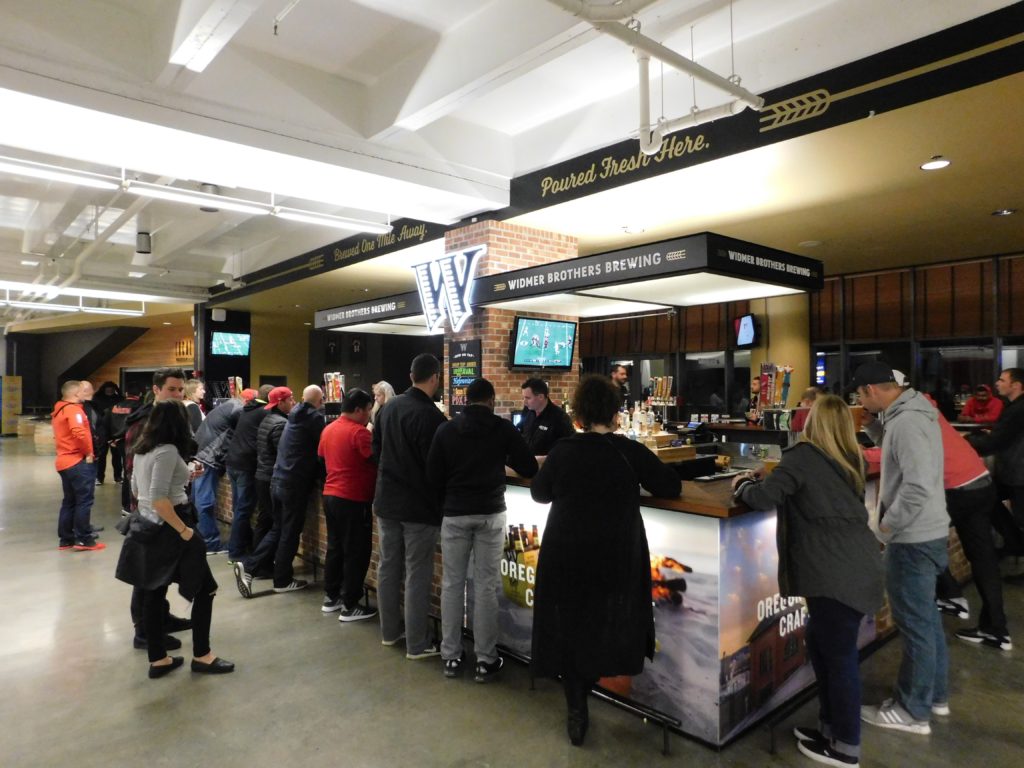 As I approach the bar, a bartender named Brian asks me what I’d like to drink. I wasn’t prepared to order yet, and I make a panicked decision — the Square Mile Cider. A bearded gentleman across the bar shoots a disapproving glare my way and I feel humiliated. To compensate for my embarrassing beer choice, I order a shot of Jim Beam, and my reputation is temporarily restored.

I return to my seat — cider in hand — and focus back on the game. Milwaukee’s length is converting forced turnovers into fast break points. Jusuf Nurkic is finding some success, but the rest of the Blazers’ roster is having trouble scoring. And then it happens. With one minute left in the half, The Greek Freak becomes a full-on unicorn.

It starts with a simple post up by Giannis. He throws his lower body into Vonleh, who crashes to the floor, followed by a left-handed slam. Clinical.

About 30 seconds later, McCollum grabs a defensive rebound and sprints into a semi fast break. The Greek Freak turns into an Olympic long-runner and gracefully chases down McCollum with a block. With three superhuman strides, Giannis spans all the way from Multnomah St. to the rim.

Twenty-four seconds later, Giannis does the same thing to Lillard, except this time violently at the buzzer. His length and explosiveness are cartoonish.

Instinctively, I jump out of my seat and scream “Swatted!” I get paid $0 to write about basketball on the Internet, which means I’m supposed to have approximately two ounces of objectivity. But that’s gone, along with my fourth drink. The rich old guys around me are not happy, and I’m drunk.

I make a bee line back to 10 Barrell, and Dan is there waiting for me. This time I know exactly what I want to drink — the Apocalypse IPA. As I pay the $12 tab, two men next to me argue about which Blazer they hate more, Evan Turner or Meyers Leonard (given the contract, the answer is clearly Turner). The Apocalypse tastes just like every other IPA: complete shit. But because I’m a man, I’m forced to pretend like I have acquired an appreciation for beer that smells like dirt.

As the second half dwindles down, I become significantly louder and more opinionated. “Why is Pat Connaughton playing 20 minutes per night?! Does Evan Turner ever pass?! Man, Jason Kidd has aged gracefully!” I’m trying to engage the rich old guys around me, but they’re clearly uncomfortable. Oh, and Giannis turns Al-Farouq Aminu into barbeque chicken.

The Greek Freak finishes with a modest stat line: 20 points, nine rebounds, five assists, three steals and three blocks. He isn’t an offensive juggernaut tonight, but he manages to control the game with his defense — something that fellow superstars LeBron James, Kawhi Leonard and Draymond Green are able to do when their offensive game isn’t terrific. The Bucks were plus 21 with Antetokounmpo on the court and minus nine with him off the court. He played an all-around excellent game.

I slowly make my way to the line of Ubers waiting outside the arena. I’m $48 poorer, it’s monsooning outside, I’m hammered, and I have work in the morning.

But I’ll always remember getting drunk with the Greek Freak.

March 3, 2017 Darby Marioth Portland Trail Blazers Comments Off on Jusuf Nurkic – From DNPs In Denver To A Basketball Rebirth In Portland

Jusuf Nurkic made his Portland Trail Blazers debut on February 16, but the Rip City crowd has only been able to watch from afar. The team only made its return home post-All-Star Weekend Thursday night. […]