The initial results of fan votes for the NBA All-Star Game was released on Thursday and as usual there was little love for the Portland Trail Blazers. Usually, upon seeing these early returns, I am filled with equal parts acceptance blended flawlessly with what-the-hell-is-wrong-with-NBA-fans.

After this year’s first round of voting, all I can think is what the hell is wrong with NBA fans?

How else can you explain this? 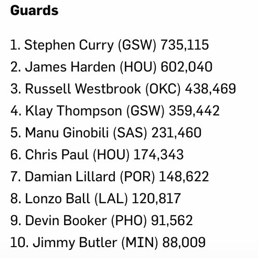 Do you see it? Have a closer look.

Where is my nope card? What I’m even looking at here?

One of three scenarios are obviously taking place here. There are a ton of California votes going into these early returns and none are from Oakland. NBA fans are really not that bright, though I never thought this before the age of Twitter. Or, LaVar Ball is sitting at a computer, constantly voting with the help of Stadium Pal.

Look, Ball isn’t having a terrible season. He’s having a perfectly fine rookie year and I’m going to love hating him for the next decade-plus. But, he shouldn’t be anywhere near Damian Lillard’s status today. Not as a star. Not as an All-Star. Not as a player, period.

Lillard should be no lower than fourth in this year’s All-Star voting. Chris Paul has been hurt for a good chunk of the first half of the NBA season and hasn’t put up as impressive numbers as Lillard. Manu Ginobli is Manu Ginobli, but Lillard is having a far better season. Perhaps, Ginobli is just getting votes for this.

lolllll Manu Ginobili throws a pass that ends up going through hoop, refs have no idea, play continues like nothing happened.

I would put Lillard above Klay Thompson, just because the Warriors have three All-Stars already and, as good as he is, Klay doesn’t mean as much to the Golden State Warriors as Lillard does to the Blazers. Even Russell Westbrook hasn’t been all that spectacular this season until recently. So, Lillard could easily be as high as third in the All-Star voting if there was any justice. Damian’s stats prove he deserving of at least a closer look at a starting spot. It would be a far more serious crime if he doesn’t make the squad this year than it was in 2017.

Only 5 players in the NBA are averaging greater than 20 pts, 4 rebs, and 6 asts per game. LeBron, Westbrook, Curry, Harden and @Dame_Lillard . #RipCity #NBAVote pic.twitter.com/ncfdQ8m5vY

As of now, however, we have Lillard just ahead of Ball. CJ McCollum should be well ahead of Ball for All-Star votes. If Ball gets into the All-Star Game, which is still highly unlikely but can’t be considered impossible in this Black Mirror universe we currently live in, LaVar may do the only thing we have yet to see him do and have a Big Baller Brand sponsored orgasm on live TV.

Thankfully, this is only the first round of voting. All this could change and I’m positive it will. NBA fan voting has always been suspect, more of a popularity contest than who’s more deserving. Most of the time, however, it’s a pretty thin line between the two.

There isn’t a thin line here.

I hope the people of Portland see this grotesque injustice taking place and take action. We deserve better than to see our All-Star point guard, who is having a stellar year so far, be in an unexpectedly close race with Lonzo from the rival L.A. Lakers for votes in the All-Star Game. Start voting, Portland. Damian Lillard deserves better.

ESPN.com’s Adrian Wojnarowski broke the internet Monday morning when he reported that Anthony Davis’ future with the New Orleans Pelicans was…well, there is no future. AD wants out, and in today’s day and age of […]

Portland Trail Blazers Week Preview – Why Harden, Gasol, And Leonard Will Give Rip City Some Problems

Hello and welcome to this week’s Portland Trail Blazers Weekly Preview, wherever you may be. Due to time constraints and illness, I’m just gonna jump right into it this week. All games are available on […]