If you squint your eyes enough, and in just the right spot, you may very well see it. It is the splinter of light that we have been searching for well over a decade; the smallest opening of a window through which our wildest dreams can burst through.

It exists, this window; in years past it has been a mere figment of our imagination, an illusion brought on by the depravation of June basketball. If we were to reach out and try and grab hold of this window, would it again vanish into a wisp of fog between our fingers? There is always that chance, of course. But, this year could be special.

The Portland Trail Blazers have a chance to go far in the 2018 playoffs. I dare not say how far for fear that the fragility of this window could crack and shatter at the slightest mention hopeful optimism.

The yellow brick road of promise laid before the Blazers isn’t nearly as menacing and frightful as in year’s past, where a group of Warriors dominated the NBA landscape. Finally, times may be a-changin’.

The path to the Western Conference Finals seems less like a suicide mission and more like foolhardy adventure. People may still think you are crazy, but in a Han Solo “never tell me the odds” kind of way instead of a Shackleton kind of way.

The first obstacle on the Blazers’ path towards immortality is the New Orleans Pelicans, where Anthony Davis awaits; a towering, MVP-caliber center with a skillset nearly as intimidating as the Pelicans’ mascot. 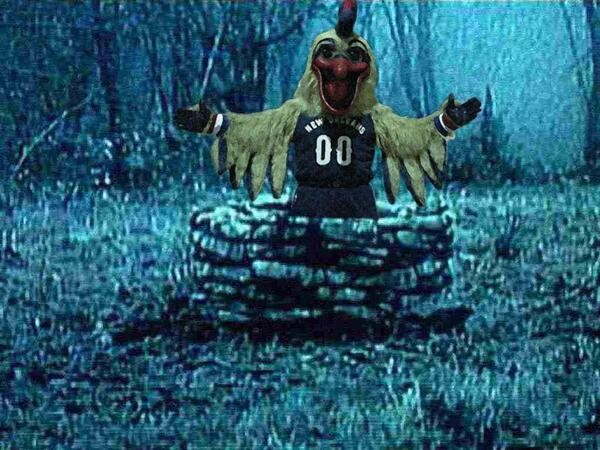 While the Blazers don’t have anyone who can straight-up match with Davis (prove me wrong, Jusuf Nurkic!), the Pelicans don’t have anyone who can contain Damian Lillard. Jrue Holliday is having a fantastic year and is more than adequate on defense, but Lillard has been extra-level phenomenal and the Blazers have been looking nearly unbeatable at home again. This is the first year in a while that the Blazers should be seen as favorites to advance to the semi-finals.

Next, would most likely be the Golden State Warriors. Lots of questions, here.  Will Steph Curry be back? If so, how healthy will he be? The Warriors are not the dominant force of nature they have been the last few years. Going to the NBA Finals for three straight years can wear on you, both physically and mentally, except if your name is LeBron James. I say that as someone who as watched them in the Finals three straight years and I’m mentally and physically tired of watching them.

Portland has been knocked out of the playoffs by the Warriors for two straight years. I’m sure the Blazers are tired of going home because of the same team every year, so they will have a little extra motivation to beating the Warriors. And, with a potentially hobbled Curry, now could be the time to exact revenge.

If the Blazers can survive the second round, the Houston Rockets would most likely be next, though I would be fine with Karl-Anthony Towns devouring them in the first round. Not likely, however, But, we all know the Blazers have a punchers chance in a series against the Rockets.

Sure, the Rockets took all four games against the Blazers this year, but Portland gave one game away and the other three were just as close, including an April 5 game where the Blazer lost by only two at Houston without Damian Lillard. The Blazers proved they can compete with the team with best record in the NBA.

And, if by some favorable bit of luck and solid play, the Blazers make it out of the Western Conference Finals, and into the NBA Finals, they would be up against an Eastern Conference squad where no team would be heavily, if at all, favored over the Blazers.

The number one-seed Toronto Raptors? Most don’t expect them to make it past the second round.

The Philadelphia 76ers? Yes, please! Give us that 1977 rematch and let us revel in the euphoria of the past and present colliding into another parade down Broadway in downtown Portland, Oregon.

The Cleveland Cavaliers? They are probably still the favorites to make it out of the East, but their roster and chemistry is unproven aside from LeBron James and Kevin Love.

If the Blazers make it to the NBA Finals, after beating Houston and Golden State, how could you not favor the pinwheel?

Is it the most likely scenario that the Blazers play into late May and June? No. Is it possible? Why not? While as daunting as this scenario may be, impossible it is not. It may have been inconceivable last year. And the year before that. And the year before that. But this season feels different, not only because the Blazers are a better team, but because the conference feels different.

No longer do the Warriors feel invincible. What was once a solidified foundation that the Warriors stood upon on in the west, is now beginning to show cracks, though it has yet to topple.

As for the Rockets, James Harden and Chris Paul have yet to come through with breakout playoff performances. They too will be heading into unfamiliar territory as a number one seed with the highest of expectations.

For this year, at least, there is the slightest bit of hope that another 49-win team can shock the world. All you need to do is focus on that faint bit of light cleaving through the darkness, beaming from the same open window the Blazers shattered 41 years ago.

The NBA Should Just Cut To The Chase

May 12, 2020 Steven Peeler Portland Trail Blazers Comments Off on The NBA Should Just Cut To The Chase

The NBA is at a crossroads moment. Do they finish out this current season, or do they abandon ship and move on to next season?  In the grand scheme of things, this is not important. […]

Portland Trail Blazers Game By Game Predictions Through The Holidays

Welcome, and Happy Holidays! Today, we’re going to be doing something different. The guys that work on the Portland Trail Blazers Weekly Previews (me and our editor) are going to be taking a two-week vacation […]