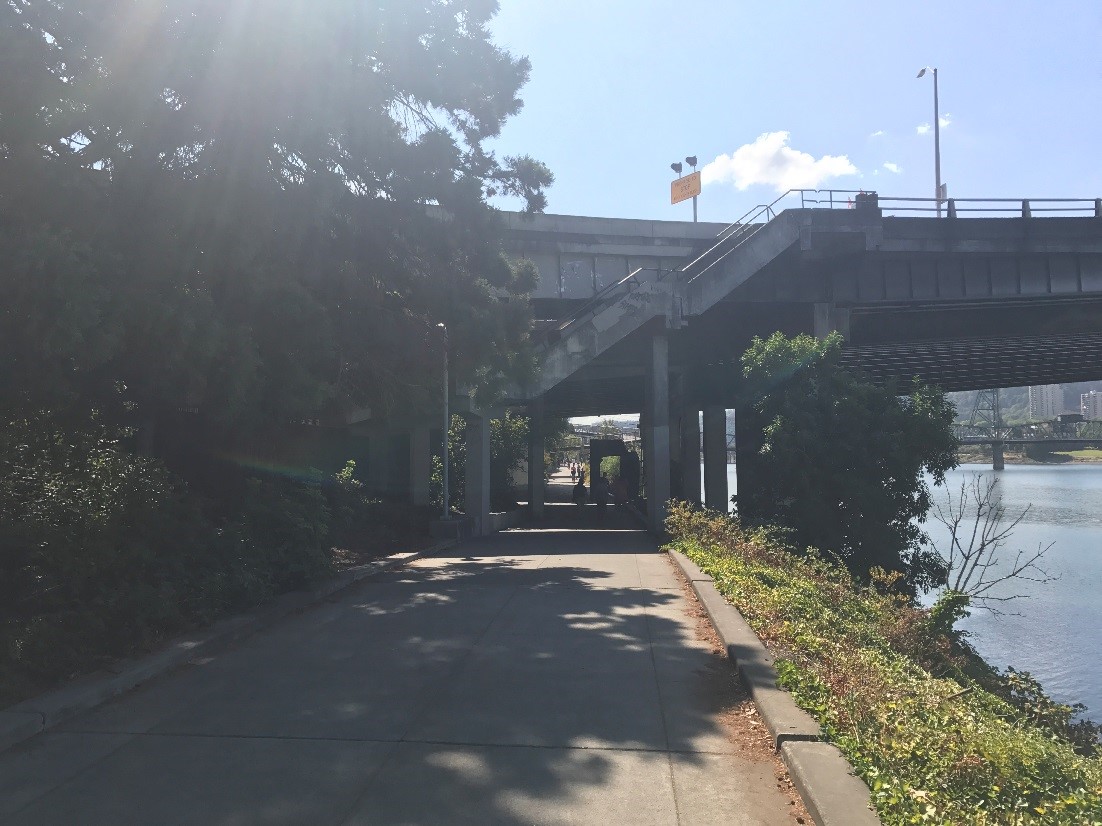 Echo Gate in the distance. If you are quiet enough, you can hear it call to you.

It stands like a miniature, hollowed-out Mordor. My journey towards it is filled with slightly less peril than that of Frodo Baggins’; my only obstacle thus far on my afternoon run being a cloud of marijuana smoke near Waterfront Park. But, once a week, always around mile 2, it summons me.

As it rushes towards me with every step forward, my mind begins to ponder the only two choices I have. Do I tempt fate, bad luck or other-worldly phenomena and go underneath it? Or, do I go around it, eluding the pull of its gravity has it desperately tries to pull me in.

And, what is that thing, anyway?

You most likely have seen it yourself if you have ever walked across the Eastbank Esplanade. Perhaps, you have strolled past it with barely a noticeable glance, oblivious to the hazard that it could swallow you whole.

I speak, of course, of that half-tunnel, half-sewer pipe looking structure underneath the east side of the Morrison Bridge.

I have run passed this odd-looking sculpture dozens of times over the years and I have never known what it was or why it was there. I had to find out, if only for my own sanity.

Turns out it is called Echo Gate and it has been standing there since 2001. It was designed by Ean Eldred and the architectural firm Rigga; it is one of four Rigga sculptures along the esplanade. It is described by the Regional Arts and Culture Council as such:

“This artwork is a gate oriented to both the pathway and the river. A sculptural hybrid echoing past pier buildings, the Shanghai tunnels and marine barnacles, it becomes both crenellation and crustacean. The sculpture gives human scale to this immense site and suggests bending an ear to the river amidst the rushing decibels of the freeway.” 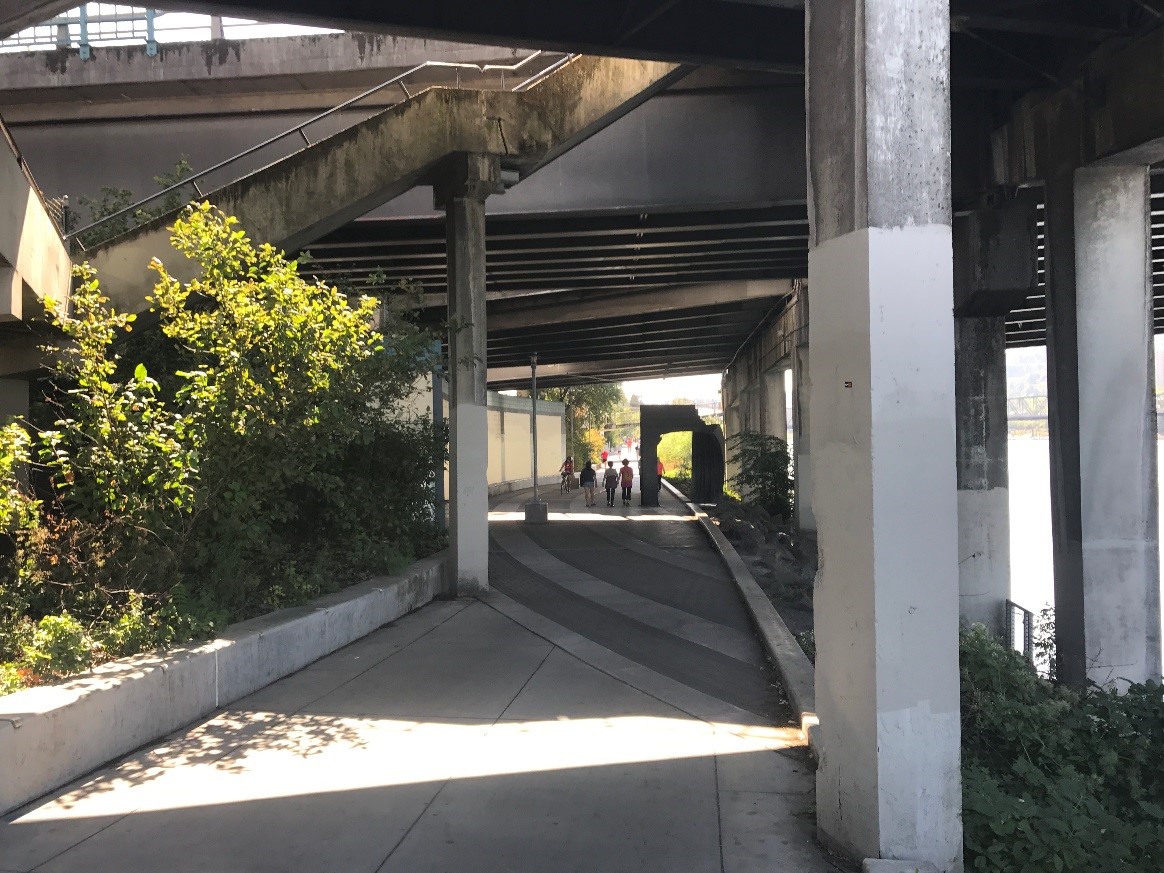 See those people in the distance? They are smart. They went around Echo Gate.

I know there is something far more sinister at work here. I know it because every time I cross the Steel Bridge from the west side, this “tunnel” awaits me.

I know for absolute certainty that if I run under Echo Gate, one of three things will happen: 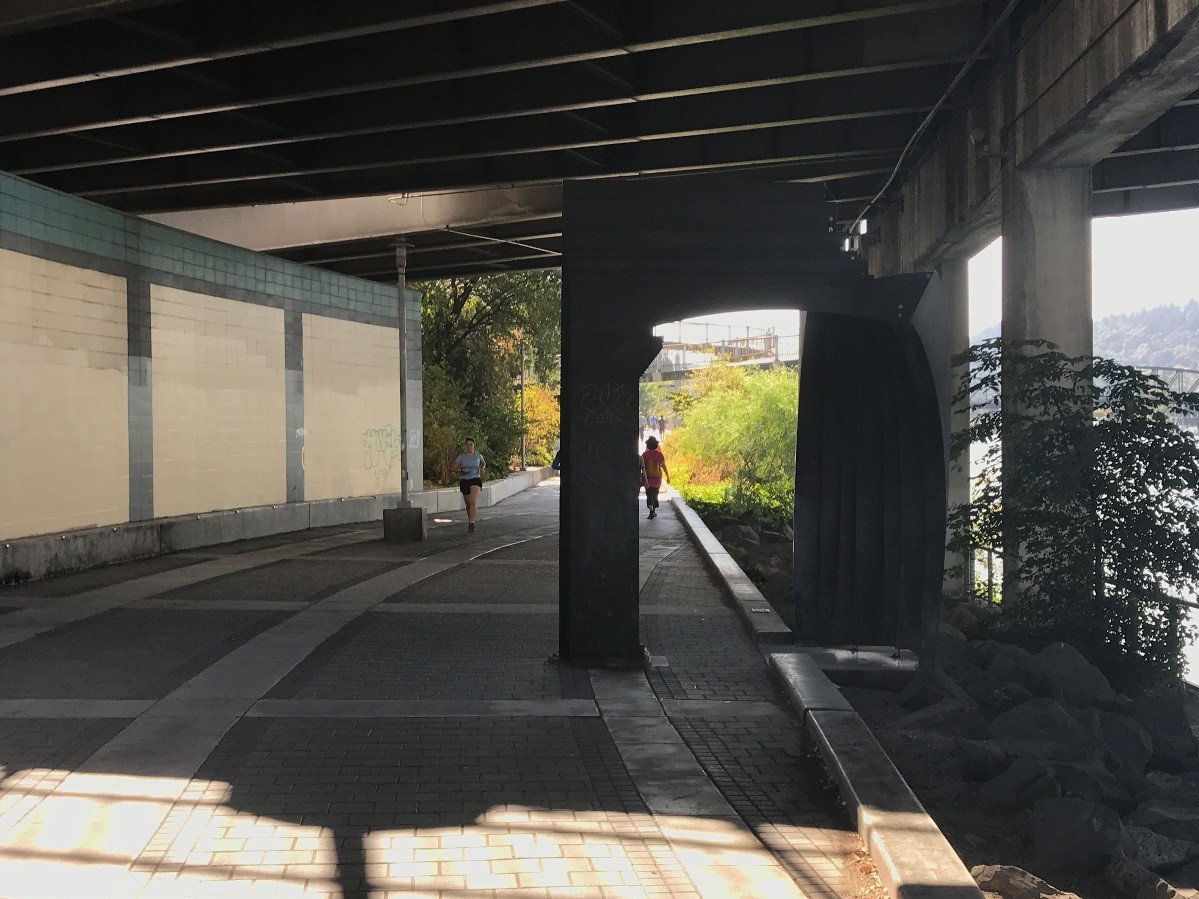 With a 66 percent chance of something horrible happening, I’m guessing I’ll go around it again. Yes, in real life I don’t run under Echo Gate because I don’t want to be transported to another dimension or have bad luck. It’s just good science.

The plaque that sits below it serves as an outright warning not to dismiss Echo Gate. Harkening back to the dark history of the Shanghai tunnels and to the early days of the city’s port history is foreboding. It alludes to the ghosts of Portland’s past which, if you do a little digging, is as far from Portlandia as you can get. 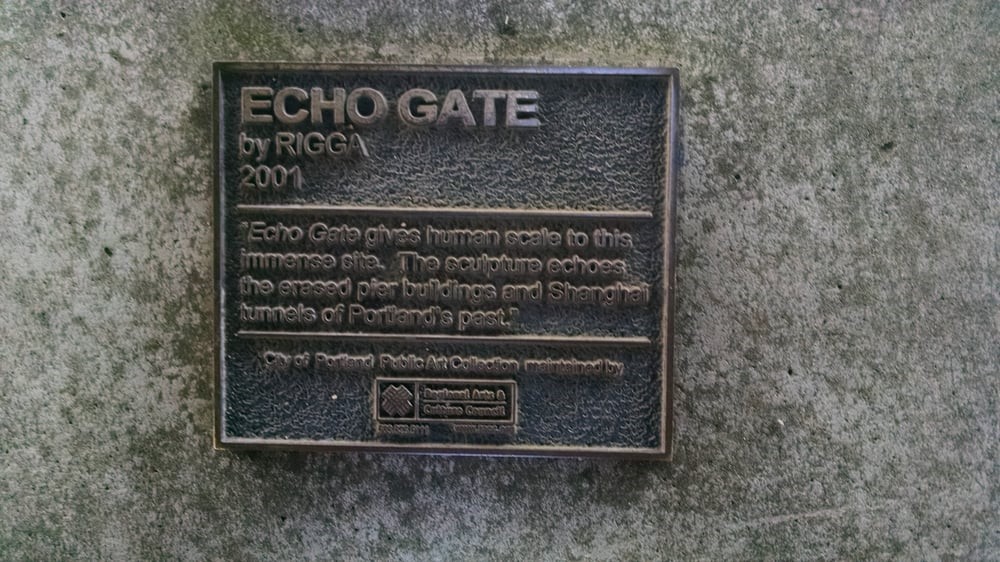 I have read enough Stephen King-type books to conclude you don’t mess with anything that has been forged with darkness in mind. I mean, if this isn’t some Buick 8 sequel here, I don’t know what is. Or, maybe this is just all my imagination. But, there is only a 33 percent chance of that.

Plus, I’m pretty sure that this felled robot at OMSI is a direct result from Echo Gate. 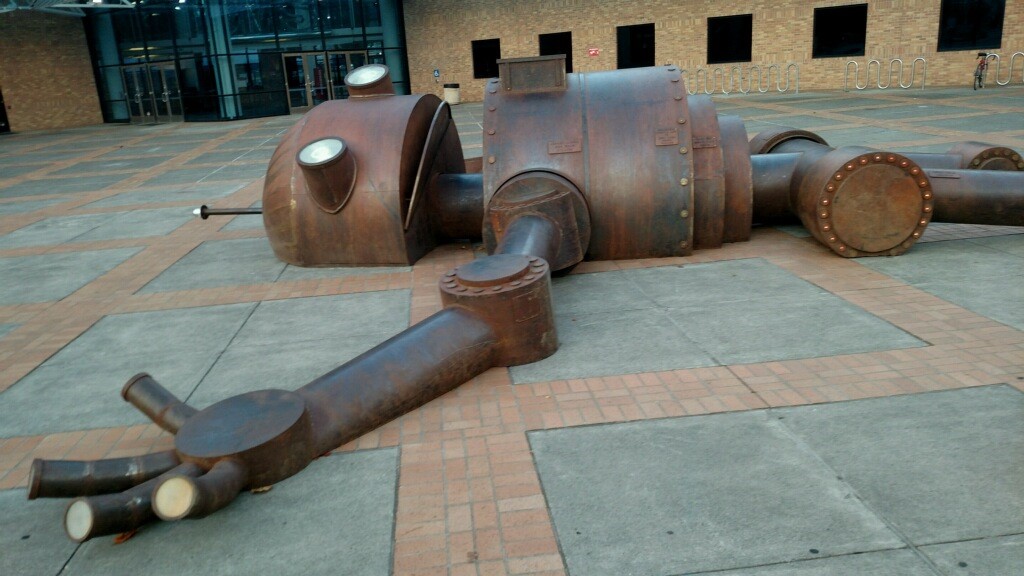 As I run past Echo Gate, my mind begins to calm. For one more day, I have beaten its insatiable appetite. The music on my iPhone gets louder, not because I have turned the volume up, but because I am once more focused on finishing my four-mile excursion. The beats of Foo Fighters quicken my steps and Echo Gate is left to the void behind me. We will see each other again on another week. 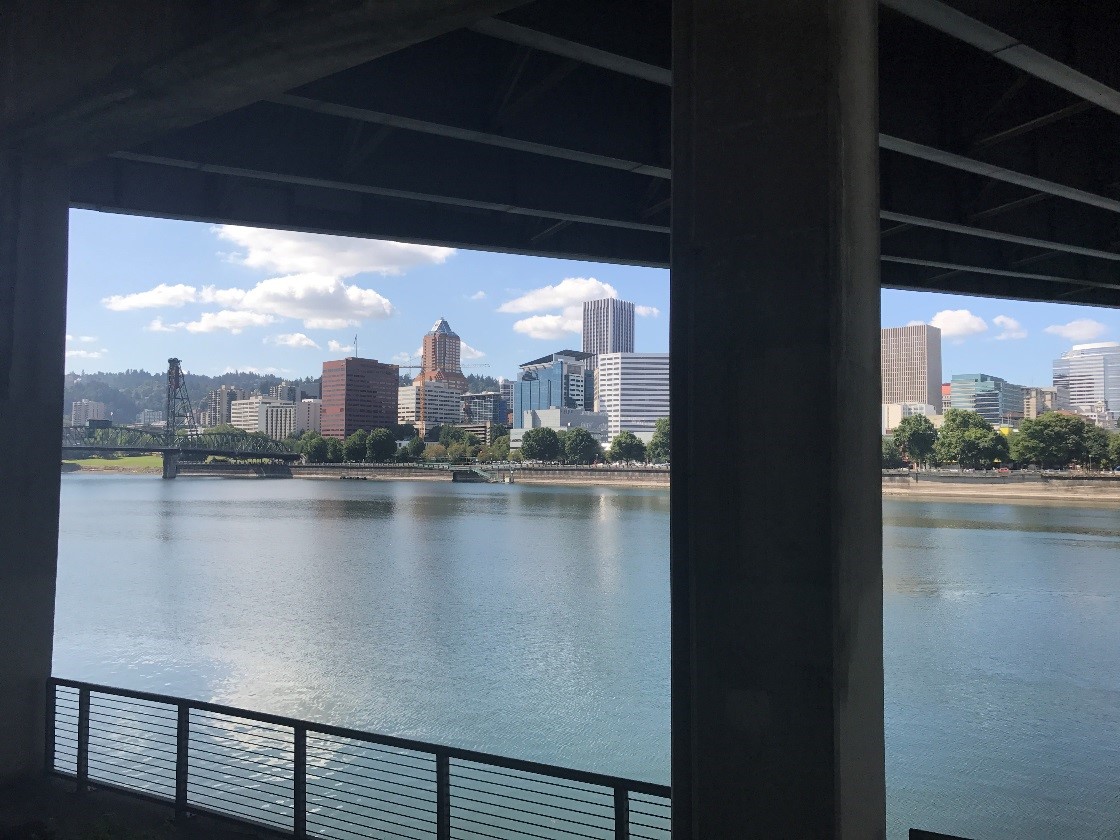 View from across Echo Gate

So, if you find yourself running on the Eastbank Esplanade on a beautiful, sunny day, don’t forget to have fun, stay hydrated, and keep breathing. But, whatever you do, don’t go underneath Echo Gate. 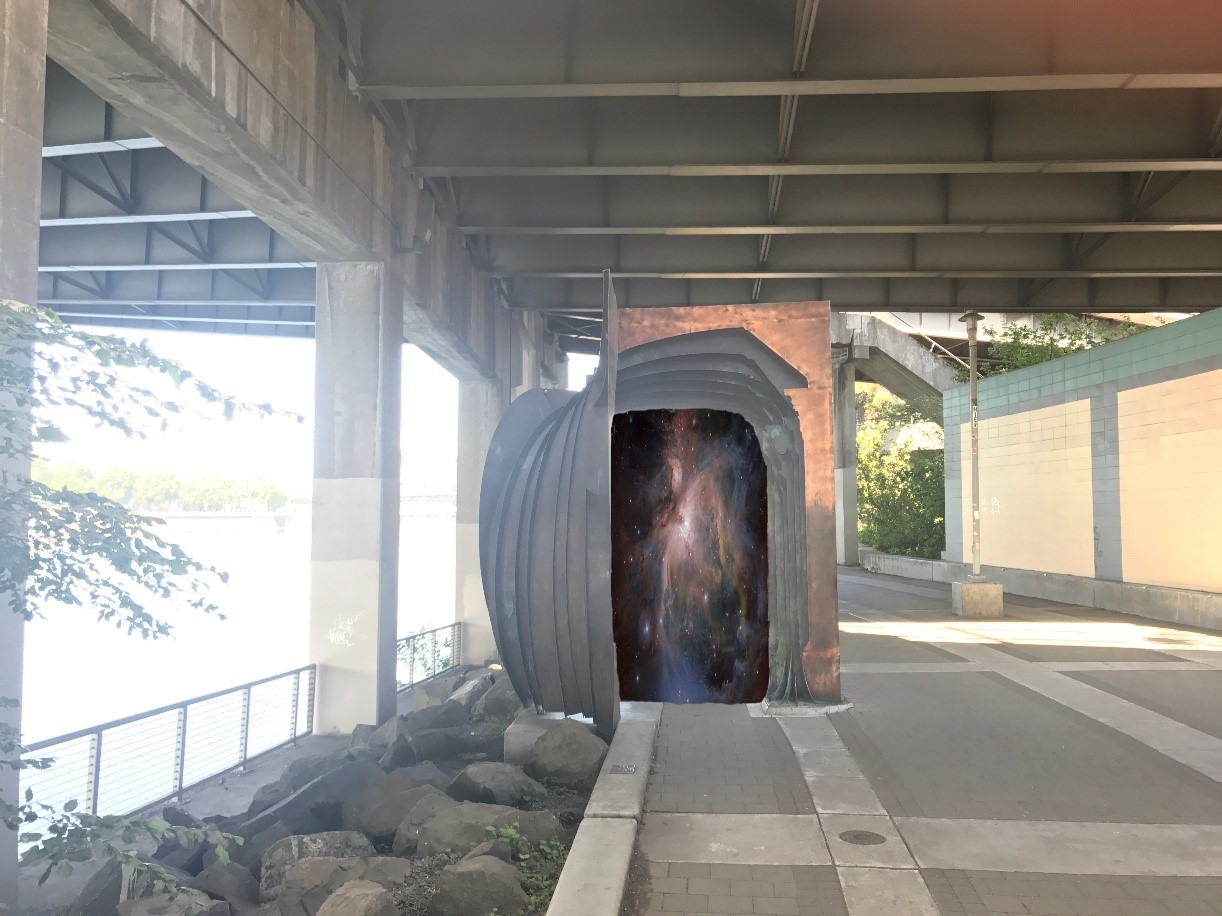