The Canadian Hockey League released its weekly updated rankings covering its sixty teams and it brings with it, a new number one. The Portland Winterhawks jumped from fifth overall to the number one spot, based mostly on an incredible run over the past two weeks. The Hawks are averaging nearly six goals per game while only allowing about two, which has made them the overwhelming favorite in the poll. 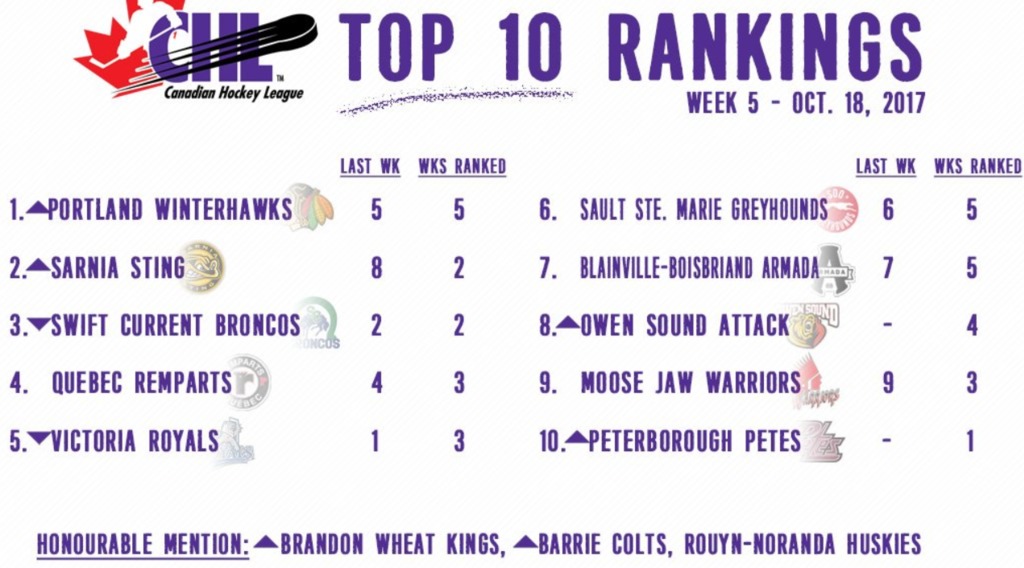 The Winterhawks are one of only three teams to rank in the poll for five straight weeks, the other two being Sault Ste Marie Greyhounds of the Ontario Hockey League and the Blainville-Broisbriand Armada, which stayed in their sixth and seventh spots respectively in the poll. The Victoria Royals of the WHL, last week’s top poll leader, slid to fifth after a loss to Spokane in a high scoring affair, only to counter with a drubbing of the Seattle Thunderbirds.

The other top ranked teams include the Sarnia Sting of the OHL, who has won nine of ten games so far and jumped from eighth to second, and the Swift Current Broncos fell one spot to third. The Quebec Ramparts remain in the fourth spot this week as the results see the Ontario Hockey league dominate the poll overall. The weekly CHL rankings are released on Wednesday and the Hawks hope to continue their run at the top if they get by the Rockets.

The Winterhawks will see action just four more times this month as they travel to Kelowna to finish their season series with the Rockets, who undoubtedly will be looking to exact a lot of revenge after being outscored 14-3 in the two meetings in Portland last weekend. The road will play host to the Hawks a great deal in the next month with eight of the twelve games scheduled away from home and included in that will be the six game in nine night Central Swing to Alberta and Southeastern British Columbia.

The Portland Winterhawks also announced their captain for the team this season along with alternate captains. These choices are made by the coaching staff and as expected by many, Keoni Texeira, the overage defenseman was named as captain for the season. The Hawks also made an interesting move in announcing six alternate captains to be divided by jersey color. When the team wears red jerseys, Alex Overhardt, Brendan DeJong and Ryan Hughes will act as alternates. The team will switch to Cody Glass, Henri Jokiharju and Skyler McKenzie when white jerseys are worn. Texeira becomes the Portland Winterhawks’ 42nd captain in team history, succeeding Keegan Iverson, who is now playing in the Los Angeles Kings farm system. Texeira will play in the second game of the doubleheader versus Kelowna this weekend as will Brendan DeJong, both of whom will wrap up their suspensions on Friday.

In Winterhawks alumni news, Brett Clayton, who started at training camp and got into action in one game for the Hawks before being reassigned and ultimately dropped from the Hawks roster and protected list, was picked up by the Tri-City Americans. Clayton had played the past two seasons in Portland, his first season for the majority of the games, but only 29 last season with an additional ten with the Brooks Bandits of the AJHL.

Ice Chips: The Portland Winterhawks Booster Club will be involved in two viewing parties this weekend. The Club will be at Kelley Creek Sports Bar in Gresham on Friday and Sports Look Grill in Hillsboro on Saturday.

The first of four meet and greet events will start in two weeks.  Portland Winterhawks players will fan out to 12 Portland Metro and Southwest Washington Toyota dealerships on Saturday, October 28 from 12-2pm and will also appear at Les Schwab locations in Beaverton and Portland on November 7 from 4:30 to 6pm.

About Stuart Kemp 294 Articles
Stuart Kemp is the President of the Portland Winterhawks Booster Club since 2008 and has been following hockey from his native Canada since he can remember, though he can't skate, but played road hockey for several years. Loving hockey and professional wrestling, he has traveled to most of the WHL cities and with wrestling, has seen four provinces and five states. It is true that every Canadian city with more than 500 residents has a hockey rink, well at least it looks that way. Stuart has had his hand in every facet of independent Professional wrestling as he debuted as an announcer in 1986 which started his career.
Website Facebook Twitter

With a third of the season cleared, General Manager and coach Mike  Johnston can start to figure out where the team’s direction is headed. Currently,  the Hawks hold down first place and have a few […]

Portland Winterhawks Win 2 Of 3, Relinquish Top Spot In US Division, Fall To 3rd By A Point

The Portland Winterhawks played a three-in-three this week as they faced a trio of US Division opponents. Portland outshot all opponents as they looked to keep pace with a couple of teams in a year […]

With Mother Nature about finished with dealing the Northwest and the Portland metro area with some harsh wintry weather conditions, it was time to get back to focusing on hockey. The Portland Winterhawks would have […]