The Portland Trail Blazers have had an up-and-down start to the 2016-17 NBA season. The problem is that the recent past has seen more of the latter than the former, and following a year when the team exceed expectations, anything less than excellence is a disappointment.

None of this is to say that everything thus far has fallen into a melancholy category. After all, Jake Layman has become a fan favorite and the backcourt is arguably the Association’s most reliable with Klay Thompson struggling to find consistency (at least once upon a time) in the Bay Area.

But with more questions than answers at this point in the process, it’s important to find the humor in the struggles. After all, basketball at its foundation is a game—a game that comes with highs, lows and, of course, memes at every turn. 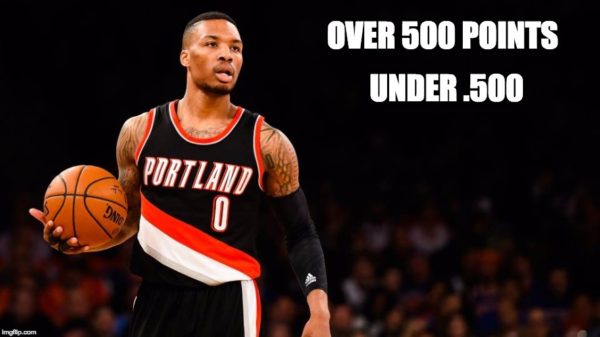 Damian Lillard made it clear before the season began what his goal was for the year. “I want to win MVP,” Lillard said, per The Oregonian’s Mike Richman. “If we come out and do the things we’re capable of doing and we win games. Then that means my performance will be at a level of MVP.”

So far this season, Lillard is averaging 28.3 points, 5.3 assists and 4.9 rebounds while shooting 47 percent from the field (a career best) and 37.3 percent from the three-point line. His numbers look a lot like those of an MVP, but the team’s record makes it virtually impossible for the point guard to be a legitimate option for the league’s most sought-after individual award.

At 9-10, the Blazers sit under .500 with nearly 25 percent of the season in the rear view. At 509 points, Lillard is second in the league in total points scored, behind only Russell Westbrook.

Lillard is great; the Blazers are subpar.

The latter will likely improve as the year progresses. If it does, the MVP discussion will become more interesting in Rip City.

Sometimes You Need a Third Wheel 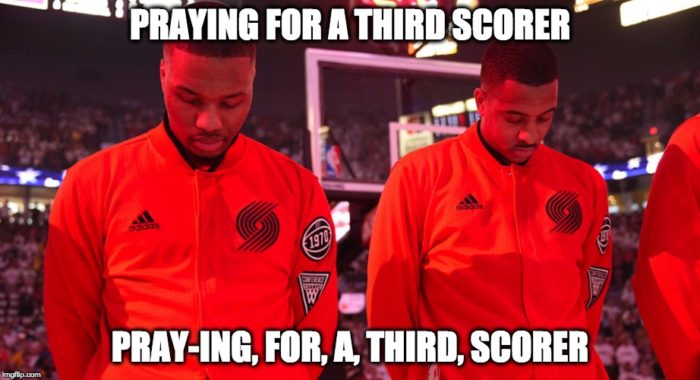 Lillard is a machine. CJ McCollum is averaging 22 points per game on an impressive 47.3 field-goal percentage with ridiculous 45.0 percent from behind the arc.

And then…well, you tell me.

Maurice Harkless is knocking down an impressive 49.4 field-goal percentage and 37.3 percent shooting from deep, but scoring just 12.1 points per night as the Blazers’ third-best scorer. Then there’s the recently PAID Allen Crabbe and the recently ALSO PAID Evan Turner failing to meet expectations.

(Mason Plumlee is the No. 4 scorer on the team, but nobody’s going to buy Portland as a contender if that remains the case).

No upper-echelon team across the NBA will be taken seriously without a third superstar, let alone a third player who can threaten to score the ball on a regular basis. 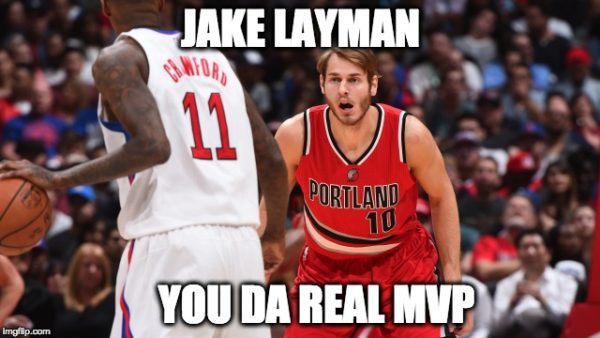 Is it the three-point shooting? Is it the above-average player efficiency rating (17.73)? Is it the hair?

Whatever it is, Jake Layman has made his presence felt in Rip City after falling to 47th in the 2016 NBA draft. He’s become a garbage time staple…and while that isn’t the worst compliment in the world, most people, including Layman, would like to see legitimate minutes for the Maryland product at this point in the process.

Evan Turner Is Kind Of a Bummer 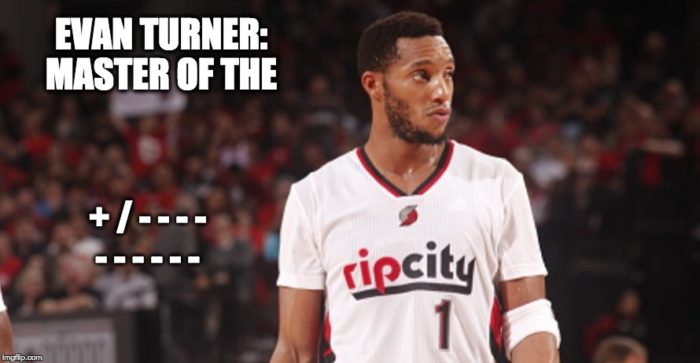 Evan Turner was always a questionable fit in Portland. The optimist’s view said that a defense-first, ball-handling forward would take pressure off the backcourt. The pessimist of the group maintained that this broken-shotted (real word, I swear) lanky dude had no spot on a roster with two dominant scorers that was full of players with untapped potential.

In terms of raw stats, Turner is sixth in points per game, seventh in rebounds, fourth in assists and dead last in the player-who-fans-are-excited-about category. But the most telling statistic of all is the Real Plus Minus. According to SportingCharts.com, Portland’s newest swingman is dead last in the league at 422nd: minus-169 total, minus-9.4 per game and minus-13.7 per 36 minutes.

It’s come to the point where people are tracking Turner’s plus-minus numbers on a nightly basis. Per the Hardwood Paroxysm’s Twitter, on the evening of Portland’s Nov. 27 loss to the Houston Rockets:

If Evan Turner can get on the floor and just make a +6 run, he finishes with a positive plus minus!

For the record: Turner ended up a minus-five in that contest. Also for the record, the former No. 2 pick has the third-highest salary on the Trail Blazers’ roster. 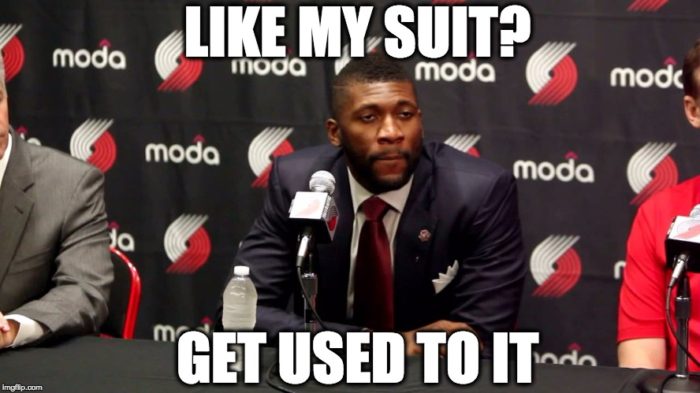 We’re not trying to play doctor here. This isn’t a projection on when Festus Ezeli is going to make his Trail Blazers debut.

It is, however, a realization that one of the summer’s best value signings came at such a value because of the knee problems that have kept him sidelined.

It’s long been assumed that the Rose Quarter was built on a burial ground full of dudes who died of lower-extremity injuries (okay, maybe that’s just me). But this is getting crazy. 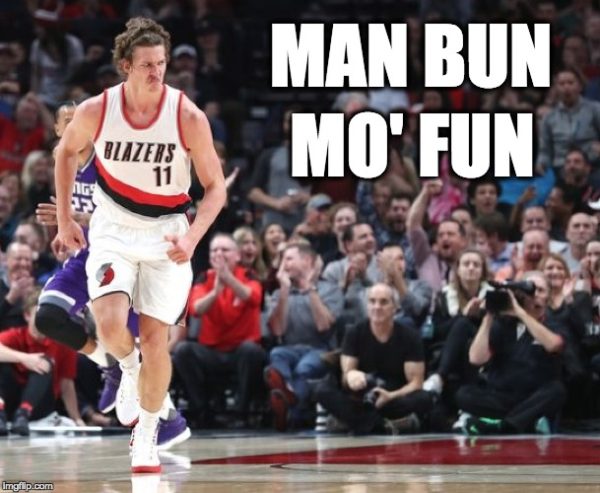 Meyers Leonard and his camp couldn’t come to an agreement with the Blazers last season, meaning his extension would wait until the summer. That decision proved to be fine, as his new salary is right on par with what his renegotiation would’ve been.

All that said, the big man has underwhelmed during the 2016-17 season.

While averaging just 6.1 points, 3.5 rebounds and 0.4 blocks per game, Leonard is also shooting a career-low 38.5 field-goal percentage and a paltry 34 percent from deep.

His major contribution to the team this season has been fodder regarding his new hairdo. 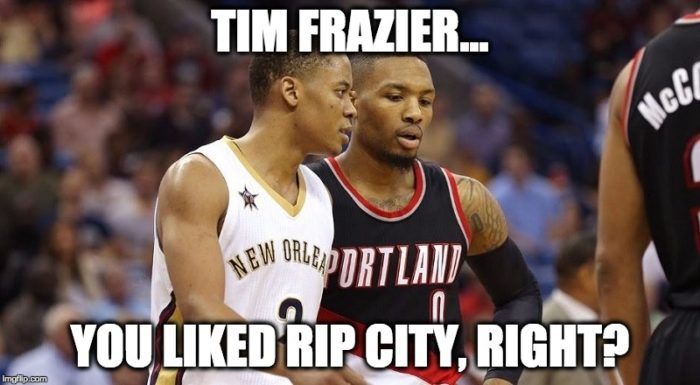 Portland waived a fan favorite last season. Yes, some Rip Citizens liked Frazier because of his ability to attack the paint and beat defenders off the dribble. But most appreciated the former Nittany Lion because of his bromance with franchise fixture Lillard.

There was also the Frazier Chronicles:

Frazier is averaging 11.8 points, 7.9 assists and 3.9 rebounds while shooting 45 percent from the field and an impressive 39.5 percent from deep on a career-best 2.5 three-pointers per game.

His de facto replacement, Shabazz Napier, is posting 3.0 points and 1.1 assists in 6.4 minutes per night.

Nobody sitting behind Lillard in the lineup will put up great numbers, but Frazier making his name known in New Orleans makes you wonder what Portland could’ve had. None of this is to say Napier won’t do the same eventually in Rip City—but the Napier Chronicles just doesn’t have the same ring.

Oh, the Portland Trail Blazers. Let’s start with the concept that sports are a wonderful, frustrating thing. We as fans get so enamored with a team and the players to the point where we lose […]