If you’ve ever been to a WNBA Seattle Storm game you know what they mean by home court advantage.

Last Saturday it was consistent, focused play by the Storm and, according to the team, the energy of the crowd that helped them win 81-69 against the defending champion Los Angeles Sparks.

“I think it felt amazing,” said Storm forward Breanna Stewart. “Just the way we played and the crowd, they really, wow, they were behind us the entire game. Anytime we needed a spark, we need some extra energy they gave it to us.”

Seattle (8-9) definitely played with a lot of energy as they stayed with the Sparks throughout the contest with good ball movement and shot selection.

Seattle was led by their trio of number one picks as Stewart (2016 number one) put in 26 points and pulled 7 rebounds, Bird (2002 number one) added 15 points including making six of seven field goal attempts and guard Jewell Loyd (2015 number one) scored 22.

But beyond their play it was the overall team play that brought the win into the KeyArena as every player who stepped on the court had an impact whether it was through points, rebounds or defense.

“When we are playing the way that we are supposed to be playing the ball is going to move and people are going to get opportunities,” said Storm head coach Jenny Boucek. “…That’s when all of our players thrive and we finally got back to that. We haven’t played that way enough this season.”

Los Angeles lead after the first quarter by six and by two going into the half.

But Seattle, who has had trouble at times coming out flat in the second half, stayed steady and seemed to enjoy the game throughout the contest.

“It was a consistent effort. I didn’t feel like we had some of the lulls that we’ve been having,” said Boucek. “We showed more resiliency and staying in the moment and whatever happened the play before good or bad just continuing to do what we’re supposed to be doing the way that were supposed to be doing it.”

The Storm definitely played the way they’ve been expected to play like all season. Besides keeping up with the Sparks on rebounds, getting 28 to LA’s 27 the team doubled up on assists throwing 20 dimes to the Sparks 10 and finished the game with a 51.9 percent shooting average compared to LA’s 37.1.

They outscored Los Angeles in the final two quarters 23-16 in the third and 21-14 in the fourth as the team felt they played their best ball.

“Truthfully win or lose I would have been happy with today’s game,” said Bird. “I think all of us would have because we finally played the way we need to play in order to win games and what do you know, we won.”

Seattle will look to continue their steady play as they host the Connecticut Sun during “Kid’s Day” starting at Noon on Wednesday, July 12th at KeyArena. 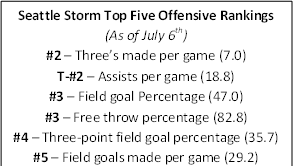 Hold onto your horses, because it looks like the window has opened for the Seattle Storm. The WNBA playoffs begin next week on the 21st, and as seedings work themselves out through the weekend, the […]

August 31, 2018 Sebastian Pycior Seattle Storm Comments Off on Expect The Seattle Storm To Punch Their Ticket To The Finals Tonight

The Storm are coming off a two game win streak in Seattle, heading to Phoenix tonight, looking to finish the trip to the WNBA Finals. Before the series started, I don’t think anyone had expected […]

The Seattle Storm Through The First Six Games – Who’s Up And Who’s Down?

June 1, 2018 Sebastian Pycior Seattle Storm Comments Off on The Seattle Storm Through The First Six Games – Who’s Up And Who’s Down?

The Seattle Storm have been on a tear through the first six games of the WNBA season, and the outlook is really bright. The team is responding well to Dan Hughes’ new regime, which is […]