The large onion stuck his head around the bullpen fence and stared awkwardly. With only one-eye, this strange, orb-shaped cyclops was on a mission to distract me, creep me out, and entertain a small pack of children in Walla Walla. Sweet Lou the Onion was doing all three of these things very well as he disrupted the visitors’ bullpen on this warm August evening in 2014. A few thoughts ran through my mind, as I unsuccessfully attempted to remain focused on warming-up to enter the game that night: “Sweet Lou, now that is a clever name. He’s an onion. Walla Walla Sweets are a type of Onion. Lou Piniella’s nickname was name Sweet Lou. He coached baseball…..I get it……Now who is in that thing?  How hot is it in there?  Where does one buy an onion costume?”

From that moment on, I began to pay more attention to the mascots. Almost every team has one, no matter the sport. They don’t speak, they make kids smile, they make kids cry, and they creep almost everyone out.  If one in every seven Santas at the mall is a convicted felon, what’s the going rate for someone who’s face you can’t see? I doubt every mascot is filling out a W-2 and getting a background check. Odds are, the bigger the franchise, the safer your kids are. Blaze the Trail Cat (Portland Trail Blazers) probably has a future NBA GM under that fur, just paying their dues as they work their way up the ladder. Harry the Husky (UW) is just a college kid looking to make some beer money for the weekend. Webbly the Frog (Everett Aquasox) and his colleagues at the Short-A level of minor league baseball are just employees of the team that drew the short straw. But if you laugh off movies such as Semi-Pro and think organizations like the Flint Tropics are far-fetched, think again. They do exist, and there are mascots in sweaty, fur-covered costumes running around and creeping people out.

Reflecting on the mascots of my childhood, there was a clear winner:  The Sonics mascot, Squatch.  He was cool. He jumped off trampolines in order to throw down monster dunks. He wore a Sonics jersey and had a headband. He made sense, and if a Sasquatch were to live anywhere, it’s right here in the Pacific Northwest.  One can only hope that when the Sonics do come back someday, they don’t forget about Squatch.  He was certainly better than The Mariner Moose, who has always creeped me out a bit. His antlers and fat head also have been known to obstruct views at Safeco Field.  The brain-child of a 1990 contest for fans, the Moose started out primarily as a roller-blading stunt on the carpet of the Kingdome.  These antics led to him crashing into the wall and breaking his ankle. Since moving outdoors to Safeco Field, he’s moved on to injuring others- namely, Indians outfielder Coco Crisp during an ATV stunt. Just down I-5, The Moose’s little brother, Rhubarb, patrols the confines of Cheney Stadium as the AAA affiliate mascot for the Tacoma Rainiers. I can vividly remember Rhubarb’s costume being a tad too small one game and seeing the large, dirty Adidas shoes poking out from underneath the costume. This ruined things for me as a kid, as I immediately saw Rhubarb as a disguised middle-aged human rather than a jubilant giant reindeer that keeps non-baseball fans entertained at a baseball game.

From a national perspective, there are certainly some winners and losers in the world of mascots. The highly entertaining and physical Presidents races at Washington Nationals games would be of the former. Stuff the Magic Dragon in Orlando is an example of the latter. Looking specifically at the Pacific Northwest, we all know the big names: Blitz, Moose, and the aforementioned, late Sasquatch. But let’s take a look at some of the lesser-known mascots in our region that have been flying under the radar 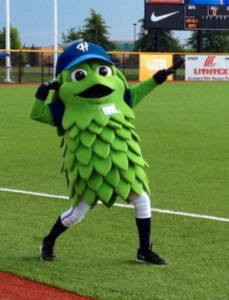 Barley – Hillsboro Hops. How many little Hops fans ask their parents, “What’s Barley?” and are then met with a lecture about malting, mashing, boiling, and fermentation? In terms of creativity, local flavor, and costume, the Diamondbacks Short-A affiliate has nailed it.

The aforementioned Sweet Lou of the Walla Walla Sweets. In a southeastern Washington town known for their onions and wine, Sweet Lou reigns supreme. The name pays homage to the great dirt-kicking M’s manager, Lou Piniella, while also tying in the famous local onion. The Summer intern that came up with this name deserves a raise and all the free hot-dog vouchers they can stuff in their pockets. 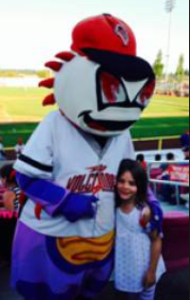 Crater of the Salem-Keizer Volcanoes. Upon closer research, it appears Crater is one of those lizards that spits blood from its eyes. If these creatures actually exist in Oregon, I can see why they have a sales tax-free state in order to coax visitors across their borders. Not even the baseball-shaped face and giant cap can hide those red eyes. Keep your distance.

About David Bigelow 15 Articles
David grew up in Gig Harbor, WA before heading to Spokane to pitch for the Zags. Over four seasons he reached second on the Gonzaga all-time saves list. He was also the closer for the Bellingham Bells of the West Coast League, helping them claim their first ever WCL Championship in 2014. Now living in Kirkland, WA, David and his wife enjoy hiking in the Cascades, watching sports (Go Zags, M's, and Hawks), and exploring the coast. They have two cats, Rocco and Stu, who keep them busy and make for great entertainment. Aside from writing, other hobbies for David include coaching high school basketball and baseball, mountain biking, and counting down the days until the next Zags Baseball Alumni Weekend.
Twitter